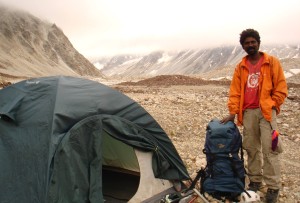 A week after he went missing during a solo attempt of Cerro Tres Cruces Sur, a helicopter search has begun from the Argentinian side for Malli Mastan Babu in South America.

An aerial search has also been arranged in Chile for the Indian mountaineer.

A helicopter search is underway in Mendoza, Argentina for Indian climber Malli Mastan Babu, who has gone missing in the Tres Cruces massif of the Andes in South America since 24th March.

The aerial search began on 31st March. Friends and family of the fastest Indian seven-summitteer from across the globe have pooled in funds to arrange for the helicopter from a private company.

Srinija, a New York-based software consultant and one of Babu’s college friends told The Outdoor Journal, “Time is running out. Babu has been missing since 24th March, and weather conditions have been rather poor for a search on foot. We had contacts in Argentina and managed to arrange for a private helicopter thanks to the tremendous support from Babu’s friends and family.”

“The Indian embassy in Chile is working very hard with the local Chile government to arrange for airborne search and rescue operation,” she added.

When The Outdoor Journal contacted the Indian embassy in Santiago, Chile, a top official explained that the floods in the Atacama region has had the government use up all of its resources to do damage control of the area.

“However, we have been working with the local government here as well as the Indian government, and have now managed to arrange a helicopter from our end. Once the weather conditions improve, it will take off,” he said.

According to sources, Babu had left for the mountains with friends on 22nd March. He had left base camp on a solo attempt of Cerro Tres Cruces Sur (6749m), the second highest mountain of Chile that lies on the border of Chile and Argentina. It is part of the Tres Cruces (three crosses) massif of the Andes.

The last known contact was on 24th March, when he told his friends that he would come down the same evening as the weather had turned ugly.

However, Babu did not come down to the base camp that evening. His friends informed the police the next day, and a search has been on ever since.

When The Outdoor Journal contacted Babu’s sister based in Tirupati in south India, she said that the Indian embassy in Chile and Argentina have been alerted, and friends in USA are pooling in funds  to arrange for a rescue. “The embassy folks in Chile cannot arrange for a helicopter rescue, since Chile’s Atacama region is steeped in flash floods, and all resources are being used for damage control of the floods,” she said. “Babu’s friend Hernan told me that he and other mountaineer friends will together go by road (from Chile) to the base camp and perform a search and rescue.”

Hernan Augusto Parajon is a Chile based mountaineer and one of Babu’s friends who accompanied him till base camp.

In a conversation with The Outdoor Journal on 29th March, Hernan, who has been Babu’s friend from other expeditions in Argentina said, “We have made a team of about 8-10 mountaineers. We are trying to reach the mountain where Mastan went missing through the Argentine side via the Paso de San Franscisco. The weather is fine, but there is quite a bit of snow from some recent storms which has prevented the rescue expedition from making any progress. We thus hope to get a helicopter for rescue. It should come soon, could come from either Argentina or Chile.”

Babu, 40, holds a world-record for being the fastest Indian to complete the seven summits in 172 days (Jan 19 – July 10, 2006). He has climbed several peaks in the Andes mountains, including the famous Aconcagua (6962m) thrice. An alumnus of Indian Institute of Management, Calcutta, he has given a number of lectures on leadership and management at companies like GE and Intel and at management schools across the globe.

When he is not travelling, the 40-year old mountaineer lives with his sister in Tirupati, south India.

Friends have created a Facebook community page with regular updates on his search.