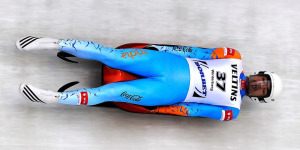 India’s only luge athlete gets an international coach

Shiva Keshavan, India’s first and only luge athlete is set to begin his training under former international champion and US coach Duncan Kennedy this winter, according to a press release from the athlete.

This is the first time in his 18-year career that the Asian record holder will have a full-time personal coach and that too from overseas and good credentials.

“Although there has been no word from the sports ministry on whether they will be supporting Shiva by helping him get a full-time coach, the Indian Luge Team is firming up their plans for the next 4 years together”, the release said.

Keshavan is currently in Lake Placid, New York training at the Olympic Training Centre and Luge Track for the Asian Championships slated for 21ST December in Nagano, Japan this year.

Keshavan has represented India in the Winter Olympics five times, is a two-time Asian champion and is considered a record holder for being one of the fastest men in Asia at 149.9km/hr.

Duncan Kennedy has won 21 world titles and is a former technical director of the US Luge team. He was also the first American to win a luge World Cup event.