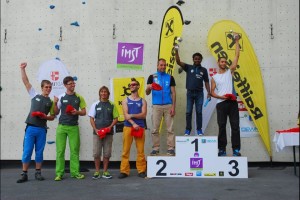 This is his second gold and seventh medal in an international competition in the last four years.

Manikandan Kumar is on a roll. Not only has he won his second gold at an international event, but the paraclimbing world champion has proven that he can get to the top (literally), against all odds.

31 climbers from the world participated in the annual event, which was being held in Austria for the second time. Mani belonged to the Men Neurological Physical Disability A category and competed with seven others in his category. Juan Pipo Gil Blanco from Spain stood second and Daniel Bar David from Israel held the  third position.

“I have come so close to winning many gold medals in so many occasions but I end up getting silver medals so far, but the wait is over to win the gold medal. I have won gold in the just concluded IFSC Para climbing cup held in Imst, Austria 2015,” Mani wrote in a Facebook post, just after the win.

Talking about the competition, the Bangalore-based climber said, “The routes here in Austria are based on climbing grades and we need to climb 6 routes with different grades.”

The routes were quite challenging on the second day but I managed to top all to win the Austria competition,” he told The Outdoor Journal in an email.

Despite consistently making waves at international competitions, he struggles for funds. He receives continuous support from General Thimayya National Academy of Adventure (GETHNAA), an autonomous body of south India’s Karnataka’s state government, responsible for promoting adventure related activities. He also receives support from brands like Adventure 18 along with his friends and students.