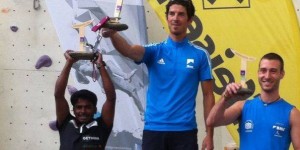 Manikandan Kumar aka Mani has been consistently making waves in international climbing competitions with achievements in paraclimbing for the past three years.

Last week, he clinched a silver medal at the Paraclimbing Cup (Lead) 2014; his fourth international medal in three years.

As many as 36 paraclimbers battled it out on the climbing wall tackling numerous routes starting from 6a to 8b+.

“There were 6 routes which we had to climb and I flashed 5 of them. But on the 6th route,  I missed the top hold for the gold medal,” a thrilled but slightly dejected Mani told The Outdoor Journal over email. The bitsy Indian contingent in Austria for the IFSC Paraclimbing World Championship, comprising just another climber named Mohammed Inayatullah, and a handful of friends, erupted in joy when Manikandan Kumar stepped up on podium for the silver medal.

“The wall in Imst is huge, incredible and with countless routes. I just can’t wait to compete tommorow,” Mani’s facebook post read a day before the finals.

He came second with 2.24 points, alongside Dave Bowes from Great Britain. Mathieu Besnard from France clinched the gold with 1.41 points. Mani has previously won a gold in IFSC‘s Paraclimbing World Championship in Bercy Village in Paris, France in 2012. He is now training for the Paraclimbing Lead and Speed World Championship to be held in Dijon, Germany in September this year.