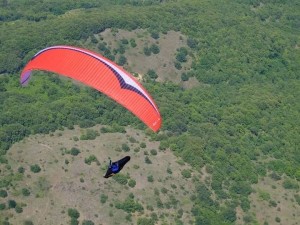 Gurpreet Dhindsa, ranked number 1 in the competition category by FAI flew ahead of 77 other paragliders at the Pre-European & Hungarian Championship 2015 but missed the podium by 17 points.

Situated at an altitude of 4,429ft (1,350mtrs), Kruševo, Macedonia was abuzz from June 29 – July 4, 2015 with paragliders from all over the world aiming for the winning title at Pre-European & Hungarian Championship. The only Indian paraglider in the championship, Gurpreet Dhindsa stood at 4th position with a total of 2718 points. He missed the podium by just 17 points. Flying in his new glider, Gin Boomerang 10, Gurpreet had to complete three tasks of 54.4kms, 62kms and 67.6kms in which he earned 982, 927 and 809 points respectively.

“As forecast was good for only two more tasks, I decided to fly a bit conservatively, doing 10th place finish on second and third valid task. But seems I was a bit too conservative as I missed the podium by just few point,” Gurpreet told The Outdoor Journal.

Before the Pre-European & Hungarian Championship, Gurpreet competed in the British Open paragliding competition in which he was placed at 26th position. “I was complimented for my flying and route choice by some pretty big names in British flying,” said Dhindsa.

Next, he looks to compete in the Paragliding World Cup in Ager, Spain from August 30 to Sept 6, 2015.