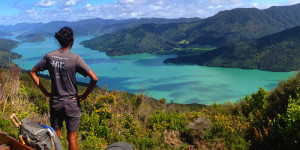 He’s now been nominated for the Wilderness Outdoor Awards 2015, open to a public vote till March 13th.

When the immigration officer asked Naresh Kumar why he wanted to move to New Zealand, he replied “Lord of the Rings.”

“I had to be honest,” he told The Outdoor Journal over telephone. “The spectacular locales of New Zealand in Peter Jackson’s epic series inspired me enough to want to quit everything and move there!”

Born and raised in Chennai in southern India, the software engineer and project manager for various Silicon Valley companies moved to the USA in 2009. Four years later, he quit his corporate job to “pursue a simpler and more joyful existence.” On receiving a permanent visa for New Zealand, he planned to begin a new life, and while researching about long distance trails, stumbled upon Te Araroa.

The Te Araroa or ‘The Long Pathway’ is a long-distance hiking route, stretching across the spine of New Zealand’s North and South Islands – from Cape Reinga in the North, to Bluff in South New Zealand. The 3000 km trail, touted as as the world’s longest public walkway covers many landscapes – sandy beaches, towering mountain ranges, ancient volcanoes, rural farmlands and rivers.  The route opened to the public in December 2011, after ten years of work by hundreds of volunteers.

Naresh has been an ultra runner for four years, starting out with the Hyderabad marathon, and then moving to tougher trails in the USA, including attempting the  Barkley 100, and finishing the Vol State 500 Kilometer race unassisted with 1st place. “I am a minimalist* at heart and run all my ultra distances in sandals,” he says.

He decided to hike the Te Araroa trail in his Bedrock Sandals, because it gave him a chance to “explore Tolkein’s fictional universe of Middle-Earth,” and a chance to push himself, test his limits. He was also motivated to raise money for TEAR FUND, a UK based development agency that fights human trafficking.

For training, he headed to Nepal and trekked the Annapurna Circuit and Annapurna Sanctuary carrying a 30kg backpack.

For his feat, completing a trying 3000km in humble sandals in under 90 days, Wilderness, New Zealand’s outdoor magazine has nominated him for the Outdoor Hero award this year, part of their annual Wilderness Outdoor Awards. The awards are open to a public vote till March 13.

When asked to describe the the trail, he said, “Weather is your biggest enemy. NZ tramping standards are very different compared to US trails. Some sections are more rugged and the terrain very unforgiving. There is no such thing as switch backs in NZ. Sometimes, all you do is climb straight up and straight down following the marked poles. It makes the challenge a real challenge. Especially on the South Island where you are tramping in alpine terrain most of the time. Being above the tree line, you are totally exposed to the weather. Streams and river crossing are a huge part of the track. Sometimes you will be walking miles along a stream and will cross rivers where the currents are swift and it will be chest deep. If the weather goes south, you have no other choice but to sit it out and wait.”

“There is no wildlife that would kill you out there but NZ’s weather will do that job. It can change in an instant. From bright blue sunny skies to wind, blizzard, hail and snow all in a matter of an hour.”

*Minimalist running is a practice of running wearing minimal, low-drop and non-cushioned footwear to mimic closely the feeling of being barefoot.