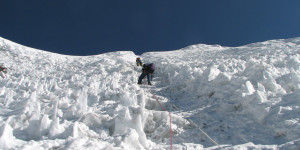 Insurance cover for Sherpas in Nepal hiked by 50%

Nearly four months after 16 of the skilled mountain guides were killed in the biggest avalanche on Everest, the government has decided to increase insurance cover for mountaineering support staff and guides.

Aug 14: Nepal has raised life insurance payouts for the ethnic Sherpa community by 50 per cent, after the 16 deaths sparked protests and led to a shutdown of the 2014 climbing season.

The April 18 avalanche fuelled demands for better compensation as well as higher death and injury benefit payouts to the sherpas’ families. The incident also put focus on the dangers undertaken by sherpa guides and support staff on Himalayan peaks in Nepal and the low remunerations they get in comparison to foreign guides.

Earlier, the Nepal government’s decision to hand out just NRs 40,000 (USD 400) to the families of the deceased had led to protests forcing the government to increase the compensation amount to NRs 500,000 (USD 5000).

The government had also pledged to set up a relief fund for injured guides using up to five per cent of fees paid by climbers, but no final decision had been taken yet, the official said.

This decision will also lead to mountaineers spending more for the insurance cover of their sherpa guides to climb any Himalayan peak in Nepal including Mount Everest, Mr Burlakoti added.

Wedged between India and China, Nepal is home to more than 1,300 Himalayan peaks – 414 of them, including the world’s tallest, are open to foreign climbers who turn up in hundreds every year.

Following the Everest avalanche, sherpas have been criticizing the government for doing little for their welfare compared to the hefty sum it collected from mountaineers as permit fees.

We know this amount is less than what they wanted, but we had to consult the private sector as well and this is the best we can do now,” Mr Burlakoti said, adding that the government would look into raising it further in the near future.