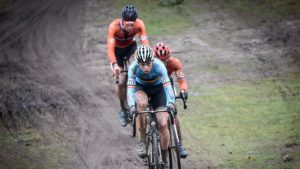 As we speak, 275 cyclo-cross riders from 22 countries are ready for the World Championships—kicking off today, Saturday, 28 January.

The crowd in Bieles, Luxembourg, can anticipate two days packed with action; the races are short and intense with athletes riding and carrying their bikes as they go through mud, snow, off-camber sections and shorter climbs.

The 3,200m long course is dashed with challenges and the support from fans is necessary when energy levels are going down. Luxembourg’s national champion, and Women’s Elite Champion in Belgium only weeks ago, Christine Majerus says, ”I think it can be a real advantage [to hear the crowd], especially if you are feeling good. It might add that 2% extra. Cyclo-cross is action packed and short in time so it won’t become boring.”

About 30,000 cyclo-cross fans have come to Bieles and Christine expects them to make a lot of noise as she races on home soil.

”Especially in cyclo-cross, the crowds are going crazy. Often during the race you are so focused that you don’t necessarily notice how out of control they were. But once you see them in a movie or during another race you think: ‘wait, were they also going wild like that during my race?’ It’s really special in cross,” she says.

Many young guns will also fight for the five titles at stake this weekend. 19-year-old Evie Richards from Britain will defend the first ever Under-23 title for women and Dutch Marianne Vos will strive for an eight UCI World Champions title in the elite race. Among the men, UCI World Champion Eli Iserbyt from Belgium and 17-year-old Thomas Pidcock from Britain are among the favourites in the Under-23 and Junior category. In the elite category, Belgian Wout van Aert and Dutch Mathieu Van der Poel are racers to watch.

The first race kicks off with Men Junior. In the afternoon, the women take over the course and on Sunday it’s the older men’s turn to fight for the medals.