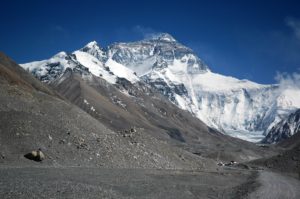 For most, climbing Everest once would be the achievement of a lifetime.

This past week Spanish ultrarunner Kilian Jornet summited Everest twice, after solo, speed ascents without the use of supplemental oxygen or fixed ropes. Now that’s an accomplishment.

Jornet made his first summit of the mountain on May 22, leaving from Base Camp (BC, 5,100 meters) and arriving at the top (8,848 meters) approximately 26 hours later. In the wee hours of May 17, hoping to best his earlier attempt, the Spaniard set out again, this time from Advanced Base Camp (ABC, 6,400 meters), and tagged the summit 17 hours into his climb at 9 pm. Both climbs followed the Normal Route on Everest’s North Face.

In a press release from his team, Jornet was quoted as saying, “I’m so happy to have made the summit again! Today I felt good although it was really windy so it was hard to move fast. I think summiting Everest twice in one week without oxygen opens up a new realm of possibilities in alpinism and I’m really happy to have done it.”

The ascents were the conclusion to Jornet’s “Summits of My Life” project, in which he has sought to “set ascent and descent records for the most important mountains on the planets” on solo climbs without the aid of fixed ropes or supplemental oxygen.

Jornet’s first climb, on May 22, is a speed record given his stated criteria, but Everest has still been climbed faster without supplemental oxygen. The May 22 climb from BC to the summit constitutes the fastest-known-time (FKT) on that particular route without fixed ropes or supplemental oxygen, if for no reason other than few if any have timed themselves on that objective. However, his May 28 climb, from ABC to the top, at 17 hours, is probably not an FKT.

The first person to climb Everest solo and without supplemental oxygen in under 24 hours was Frenchman Marc Batard in 1988, via the South side in 22 hours, 30 minutes.

In 1996, Italian Hans Kammerlander climbed from ABC to the summit in 16 hours and 45 minutes without supplemental oxygen (but Kammerlander likely used fixed ropes, and received support from Sherpa along the route).

The current benchmark from ABC to the summit without supplemental oxygen (and probably without fixed ropes) belongs to Austrian alpinist Christian Stangl, who reached the top in just 16 hours and 42 minutes in 2006. Stangl told Explorer’s Web in an interview: “The idea to speed-climb Mt. Everest in a single day came up in a conversation with Hans Kammerlander in Kathmandu in spring 2005. I always admired his performance back in 1996. But the ‘disturbing’ thing to me was that he had used ‘resupplies’ (Sherpas in camp 1 and 2 who were waiting for him with hot drinks etc.). My idea was to climb completely independent, without resupplies and in ‘pure’ Alpine Style.” (Stangl claimed not to have used fixed gear, but has lied about other ascents before, as with a debunked summit of K2.)

While the speed records were the main goals of Jornet’s climbs, ultimately it is his two summits in so short a time and in such lean style that is the story. As Jornet said, it “opens up a new realm.” The Spaniard’s climbing style, like so many other cutting edge alpinists in his generation, owes much to Ueli Steck. When Steck died earlier this season on Nuptse, Jornet posted the following on Facebook: “Thank you Ueli for being a mentor in alpinism and a constant source of inspiration. Every climb with you was a learning [experience] to keep improving along with a mountain lover.”