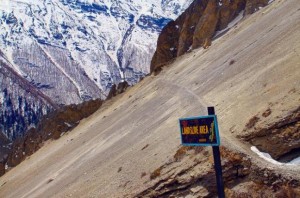 Landslide in Nepal kills at least 20

Incessant rainfall in Kaski and Myagdi district of western Nepal triggered a landslide killing at least 20 people, according to Reuters.  Exact figures are yet to be confirmed by the authorities as search and rescue work is still going on. A dozen people are believed to be missing.

According to Nepal’s local publication, the Nepal Army helicopters have been deployed in Lumle VDC (Village Development Committee) and so far five people have been rescued successfully.

According to locals, a sudden outbreak of the water reservoir caused flash floods resulting in landslides. Four people were killed and 13 injured in Bhadaurtamagi of Kaski district.

Another local publication states that a  bridge over Harpan River has been swept away due to the flash floods. Pokhra-Baglung highway has also been destroyed due to the landslides in the area creating problems for the rescue teams to reach the affected area.

Two powerful earthquakes hit Nepal earlier this year, claiming more than 9000 lives. The earthquakes may have caused instability on the mountain slopes, resulting in landslides during the rainy season.

Monsoon in Nepal lasts from June to September.

The landslide is another big blow to Nepal, which is trying its best to recover tourism in the region.

Feature Image: Vitaliy Mateha (A landslide warning sign is posted high in the Himalaya Mountains in Nepal, where heavy rains can trigger dangerous landslides during the summer monsoon months.)