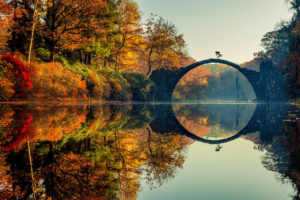 The winners of the world’s greatest action and adventure sports photography contest have been unveiled at a spectacular Winner Award Ceremony in Chicago, USA.

The best action and adventure sports photographers from around the globe were celebrated in Chicago on September 28 as the Red Bull Illume Image Quest 2016 Overall Winner, 11 Category Winners and Top 55 finalist images were unveiled.

Next to winning the Masterpiece by Yodobashi and Playground categories, German photographer Lorenz Holder also took the top spot for the second time running. His atmospheric shot of athlete Senad Grosic riding his BMX across a bridge in Germany received the most votes from the panel of 53 respected judges. In addition to the Overall Title, Lorenz’s winning image also took home the coveted Athletes’ Choice Award.

Mr Holder, who works as a staff photographer for Nitro Sports, explained how he got the shot to The Outdoor Journal, “I discovered this lake in Germany by accident and decided that this was the perfect spot for a shooting with an athlete. The bridge mirrors in the water and this is the perfect circle. The day of the shooting we had to clear the lake of all autumn leaves before we have been able to do the shooting with Senard Grosic. Today I am just feeling overwhelmed!”

The Outdoor Journal Founder and Editor-in-Chief Apoorva Prasad who was also a Red Bull Illume 2016 judge said, “Congratulations to Lorenz for the win, and to everyone who participated! It was overwhelming to receive so many incredible entries, depicting the spirit of adventure in such naturally beautiful environments. I have always maintained that adventure and action sports photography represents a kind of pinnacle of human spirit and achievement. Most photos did just that. It was an honour to play a part in this.”

Lorenz Holder's Bio
I grew up in Munich, close to the Bavarian mountains, and it is those mountains that have always played a major role in my life. I was a semi-professional snowboarder back in the day, until I injured myself badly and I pretty much had to quit snowboarding for a whole season in 2003. In that time I discovered the pleasure of photography. In my photos, I like to show the viewers the beauty of the environment where athletes perform. I’m a huge fan of landscape and architectural photography and I try to combine those genres with action sport. I think a great location is one of the key elements for a great action picture. Right now I work as a staff photographer for Nitro Snowboards.

The Winner Award Ceremony was held at the Art Institute of Chicago and hosted by television personality Tina Dixon and snowboarder Louie Vito. It also celebrated the 10-year anniversary of the prestigious contest with many guests from the photography industry and sports scene, such as BMX athlete Senad Grosic, freeskier Johnny Collinson and Red Bull Illume founder Ulrich Grill.

The tour will stay in Chicago until October 9 where visitors can enjoy the world’s best action and adventure sports images for free. To showcase the amazing imagery in a unique way, the exhibition will only be open after the sun goes down, between the hours of 6:30pm and 10:30pm. After Chicago, the tour will head to Toronto, Canada, Yonkers, NY and San Francisco, CA. Further tour stops will be announced on redbullillume.com shortly.

Close Up: Denis Klero, Russia with his black and white shot of climber Rustam Gelmanov showing his chalk-covered hands in Fontainebleu, France.

Energy: Luke Shadbolt, Australia for his black and white image showing the power of nature. Surfer Renan Faccini is set against a huge swell in Rio De Janeiro, Brazil.

Enhance: Dean Treml, New Zealand and his image of cliff diver Jonathan Paredes jumping from the 28 meter platform on the roof of the Copenhagen Opera House during the Red Bull Cliff Diving World Series, 2013.

Lifestyle: Jody MacDonald, Canada with her mesmerizing image of her brother Ken MacDonald sitting atop a train during their adventure through the Sahara Desert.

Masterpiece by Yodobashi: Lorenz Holder, Germany showing Senad Grosic ride his bike over a bridge in an autumnal Gablenz, Germany.

New Creativity: Ale Di Lullo, Italy for his fun shot of Aaron Chase riding his mountain bike on the windshield of a NYC cab.

New for 2016 was the Mobile Category. It was won by Vegard Aasen, Norway for his black and white mountaineering image taken in Hakuba, Japan.

As the Overall Winner, Lorenz Holder received a €40.000 voucher from Yodobashi, a Sony iLCE-A7RII camera with a full set of lenses, a Broncolor Sirus Kit and a G- Technology G-Drive ev RaW SSD.