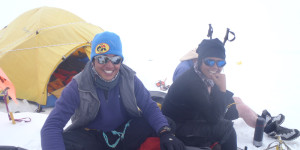 Their aim was to be the youngest to climb the world's 5th highest peak.

But a locked knee from Camp 2 stymied Krushnaa’s attempt, while Arjun is furious with Sherpas for “lying” about fixing ropes to the summit.

India’s young Everest summiteers Krushnaa Patil (24) and Arjun Vajpai (21) failed to summit Makalu (8481 m) the second year in a row. Their dream – to be the youngest to top the big mountain – remained unrealised for Patil due to a knee injury. For Vajpai, it was more of a recurring nightmare from his 2013 experience, when he was forced to turn back 100 m from the summit due to a lack of fixed rope. This time Vajpai was not shy of accusing the Sherpas assigned to fix the line on the 8000er of lying about doing their job.

Makalu is located in the Mahalangur Himalayas 19 km southeast of Everest, on the border between Tibet and Nepal. Fewer than 400 have reached Makalu’s summit, as compared to about 4,000 on the world’s tallest mountain.

Their expedition took the standard Northwest Ridge route, the most popular on Makalu. The route starts at 5,700 m on the west of Makalu. Then it climbs to Makalu-La (7400 m) before going south to the French Couloir (8300 m) at the bottom of the North Face and finishes on the Northwest Ridge. It was the route used on Makalu’s first ascent by the French in 1955.

When The Outdoor Journal caught up with the Indian mountaineer in India’s capital New Delhi after his failed expedition, Vajpai did not mince words in talking about the “unprofessional handling of the situation by the trekking agency”. The two had been outfitted by Kathmandu-based Seven Summit Treks.

For the 2014 climbing season Seven Summit Treks (or 7s) was given responsibility to ensure route setting and rope fixing on Makalu – a first for the expedition agency. They also had 28 registered clients with them to climb Makalu, the maximum this year compared to other trekking groups. All but four mountaineers summited.

Vajpai, who was with three other Indians, two European climbers, and two sherpas, says this group had the first window for the summit push from Camp 4 on May 17, during a good break in the weather.

Just 400m out of Camp 4, they discovered that there were no more fixed lines to the summit. They climbed without fixed lines till the French Couloir at 8300m. But the last sections were highly technical and they turned back about 80m from the summit.

In his words Vajpai says, “At Advance Base Camp, after the Sherpas came down from their last rotation before the first summit  push of the season we were told that their rotation was successful and they were able to fix the lines up to the French Couloir at 8300m and had deposited about 300 meters of ropes, a couple of ice pitons and some rock pitons. This was more than enough for us. When I and the other climbers left from Camp 4 on the 16th of May for our summit push, just about 400 meters from the camp we saw that there were no more fixed lines and we were still about 6 hours away from the French Couloir. That is when it struck us that the Sherpas had not been honest about their rotation, leaving us with a very few choices. We decided to move ahead alpine style with just me and my two personal Sherpas attached to a few meters of rope. Even though it was very risky to have gone up without any fixed lines we kept going on. Somehow we managed to get right above the French Couloir but were extremely exhausted. There were a few more huge rock patches which we had to cross. It seemed very risky with the (inadequate) amount of rope which we had and our depleting energy. That was when I decided it was better to turn around and come back for the summit next year.”

Vajpai, with three previous 8000er climbs to his credit, returned to Advance Base Camp and got to know two days laters later that the two European climbers (the adventurer Mike Horn and Swiss alpinist Fred Roux) had climbed Makalu without oxygen, and had fixed the remaining rope to the summit. Subsequently, the other three Indians summited after May 18.

The Indian mountaineer says that  his calculations indicated it was too risky to go back up again within such a short period of time. “I cant comment about other climbers but I couldn’t have recovered at that altitude and didn’t feel it was safe to retry a summit push,” says Vajpai.

Back in Kathmandu, Vajpai says he raised the issue before the expedition outfitters, “but they did not admit it was their mistake and kept saying logistic issues are part of mountaineering.”

The Outdoor Journal contacted Seven Summit Treks over phone for a clarification on these allegations, following which they admitted to some issues during the expedition, but stood strongly by the sherpas employed by them.

Mingma Sherpa, director, Seven Summit Treks said, “I spoke to the sherpas laying rope on Makalu. They realised they were short of manpower to set the line from Advance Base Camp to the summit, and wanted to go back for more personnel and rope. The mountain is a treacherous place at times and mountaineers have to adjust to situations instead of complaining.”

Singaporean adventurer Khoo Swee Chiow successfully summited Makalu this year, and remembers meeting Vajpai and the the other Indian climbers at various stages of their climb. Though his 2014 expedition was glitch-free, Chiow has had his share of “bad” experiences with trekking agencies on the tallest mountains of the Himalayas.

“Though I did not face any logistic issues this year, I know for certain that on a big peak like Makalu and all 8000m peaks, many things can go wrong. I don’t know what happened between Arjun and the sherpas fixing the lines, but I can tell you I have had similar experiences on some peaks,” says Chiow, who is also the fourth person in the world to complete the “Explorers Grand Slam” – the North & South Poles and the world’s 7 summits.

Chiow says last year he was on Everest with Seven Summits Treks, and was deserted by his sherpa at Camp 4. “Sherpas are humans just like us, some are good and some are not,” he adds.

Taking notes from their 2013 failed summit of Makalu, Patil and Vajpai had said prior to their expedition that they were better prepared and had sponsors for the trip. They were also part of a larger 32-member group, with mountaineers from several countries as part of the team.

According to Krushnaa Patil, problems for various team members began from Camp 2. Fellow climber Will Cross, a diabetic, became severely unwell. She herself experienced a locked knee and realised she couldn’t risk climbing on that knee.

In her own words she says, ‘I had expected this expedition to go on very long. I had planned it that way, but on the first rotation to camp 2, I had stayed up on two consecutive nights – one when we (Arjun Vajpai, Yannick Gagneret and I) were nursing Will Cross back to warmth, and the other when I held my left knee. I was in excruciating pain, it locked, I just couldn’t move it. And to top it up it was a cold windy night, even in the tent especially the top surface was covered in snow, and so was my head. It was a miserable night. In the morning I had tears in my eyes. I knew I didn’t want to go up on this knee, but I really wanted to go up. We went back down to the base camp, I pondered about what I should do next. I was terrified at my locked knee. I didn’t feel right to go over the Makalu La (7400) with a bad knee. I know how tough it was getting down with both knees working. I would have to be lowered down if I were to be helped to get off Makalu La, and I decided it was time for me to turn around.’

Patil left for Kathmandu within a week of reaching Base Camp.

In an unfortunate turn of events on the big mountain, Frenchman Yannick Gagneret (39), who was in their team  passed away during his descent from Camp 3, where he reportedly suffered from high altitude sickness and severe exhaustion. On his way down, he showed signs of cerebral oedema and was given medication at Camp 1. He died at Crampon Point at 5950 mts, just before reaching Advance Base Camp. Makalu is considered one of the tougher 8000ers, with sustained technical rock and ice pitches, very cold temperatures, and dry and cold Westerly winds. The mountain has had 22 fatalities in its climbing history.

While Patil and Vajpayee did not taste success, a lesser known mountaineer from Western India became the first civilian Indian to summit Makalu.  The Outdoor Journal spoke with Ashish Mane to find out more about his historic climb, and the report will come soon our site.