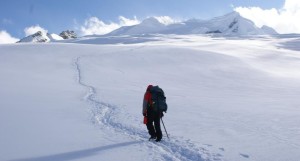 More than ten days after he went missing during a solo attempt of Cerro Tres Cruces Sur (6749m), top Indian mountaineer Malli Mastan Babu was found dead at an altitude of 5900m on Saturday.

India’s fastest Seven Summits climber Malli Mastan Babu was found dead in the Tres Cruces massif of the Andes in South America on Saturday morning at 1am IST. According to sources, he was found at around 5900m inside the wind-ripped remains of his sleeping bag and tent.

Satyam Bheemarasetti, an entrepreneur and CEO of NeoSilica based in Hyderabad and Babu’s friend and official communications spokesperson associated with the matter told The Outdoor Journal, “I have been in regular touch with the rescue team. The expert mountaineers summited the peak at over 6600m. It was on their way down, at about 5900m that, in the white field they noticed an orange speck at a distance. When they went closer, they saw it was a tent in tatters. And that’s where they found him.”

“The team told me that there had been fresh snow in the past week, and that the weather had been terrible. His telecom links were cut off because of the incessant storm. It is difficult to speculate how long he had been dead for,” he added.

“The team did not have enough manpower and equipment to bring him down. Also, an ugly storm is brewing in the region. They will go up again, fully equipped and bring him down,” Satyam explained.

According to sources, Babu had left for the mountains with friends on 22nd March. He had left base camp on a solo attempt of Cerro Tres Cruces Sur (6749m), which is on the border of Chile and Argentina. It is part of the Tres Cruces (three crosses) massif of the Andes.

The last known contact was on 24th March, when he told his friends that he would come down the same evening as the weather had turned ugly.

However, Babu did not come down to the base camp that evening. His friends informed the police the next day, and an extensive search and rescue operation was launched after a delay of few days due to bad weather and the remote location of the mountain. A helicopter search and rescue mission started from both Chile and Argentina on 31st March, with the help of funds pooled in by Babu’s friends and coordination amongst the governments of India and Chile and the Indian embassy in Chile.

In an interview with Hernan Augusto Parajon, Babu’s friend who was part of the rescue team, the Chilean mountaineer told The Outdoor Journal, “The person that found Mastan was Mariano Galvagno, a famous Argentinean climber (who climbed Everest without oxygen). The body is still in the mountain; it is hard to access the area because of all the snow.  The expedition could barely get there; they would literally sink into the snow so to speak. It is going to take a while to get the body.  If asked, I may do it himself but only in a about a week when the conditions improve, otherwise people would be at risk.   Helicopters played no role, it was Galvagno’s expedition that found it. I am very sad about Mastan’s death; we were good friends from many years ago and I had great respect and friendship for him.”

Meanwhile, a statement was released by the rescue team comprising of Malli Mastan Babu’s friends and alumni network:

With profound grief we break the sad news of our dear friend and one of worlds’ mountaineering legend Malli Mastan Babu’s demise.  Malli was on a solo attempt to summit Tres Cruces mountain in the Andes and hoist the Indian flag one more time.  He started for the summit on the 24th of March and was to return the same day. However, the weather turned extremly bad accompanied by heavy snowfall and Malli could not make it back to the base camp.  An extensive private search and rescue operation was launched with the help of Malli’s mountaineering friends and funded by his alumini network (Sainik School, NIT Jamshedpur, IIT Kahargpur and IIM Kolkata).  Malli was located near the summit at around 5900 meters in his tent.

Friends and family of Mastan across the globe stand together in remembrance of one of world’s finest mountaineer and India’s national hero.

In the telephonic conversation with The Outdoor Journal, Satyam also mentioned, “When I saw the images of Babu sent by the rescue team, he seems to be in perfect harmony with nature. He had told us once that if he wanted to settle anywhere, it would have been Argentina.”

Babu, 40, held a world-record for being the fastest Indian to complete the seven summits in 172 days (Jan 19 – July 10, 2006). He climbed several peaks in the Andes mountains, including the famous Aconcagua (6962m) thrice. An alumnus of Indian Institute of Management, Calcutta, he gave a number of lectures on leadership and management at companies like GE and Intel and at management schools across the globe.