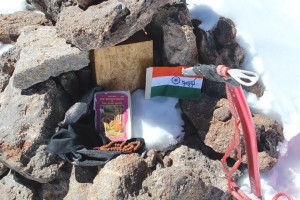 Malli Mastan Babu’s body reached New Delhi today morning, with a two-hour stopover for friends and family in the city to offer their respects.

It is now on its way to his hometown Nellore in south India.

Days after the Indian mountaineer’s body was retrieved from the Andes, it reached New Delhi today morning at 07:40 IST for a brief stopover.

A gathering for friends and family was arranged at the city’s airport’s cargo hold area. Dr. Dorassanama, Babu’s sister, who has been travelling with his remains from Buenos Aires was present along with several of his friends based in the city. The mountaineer’s remains were inside a casket and well-wishers offered their respects by offering flowers.

Sporting Babu’s red Mountain Hardware jacket in which he was found, Dr. Dorasanamma, Babu’s sister told the local press present at the gathering, “I thank the media for their support, and am very grateful to the Indian government  for their constant support at each point.”

Dr. Ramesh, Babu’s childhood friend and organiser at the gathering told The Outdoor Journal, “Today, 15-20 of Babu’s friends from school or college got together to pay  respects to him. I have known Babu from his childhood, sixth standard onwards.  We are all here to salute his bravado.”

In an operation aided by local governments of Argentina and Chile, Babu’s body was retrieved from the Andes and brought down to Tucuman town in north Argentina last Monday, where it was embalmed. After completing the required paperwork the Indian government aided in the body’s return from Buenos Aires to his native hometown Nellore, Andhra Pradesh in south India, where it is currently headed.

From New Delhi, it flies to Chennai, the nearest airport to Nellore and continues the rest of the journey on road.

The mountaineer will be honoured at a state funeral at his hometown Nellore, Andhra Pradesh amidst a large gathering tomorrow morning, 25th April.