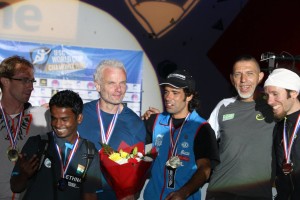 “It was an incredible competition and my finals were witnessed by more than two thousand people during the finals and my performance was highly appreciated by all of them and the atmosphere at the competition was just incredible,” an excited Mani told The Outdoor Journal over email.

His Facebook feed was flooded with messages of congratulations from friends and peers. “I would like to dedicate this silver medal victory for everyone involved in sponsoring me and supporting me right through my career, which allowed me to win more and more medals for my country and to all the people back home and for climbing community in India,” he wrote in a Facebook post just after the win.

Earlier this year, he clinched gold at the Lead Paraclimbing World Cup at Imst, Austria. This is second medal in a row this year and his eighth medal in the last four years.