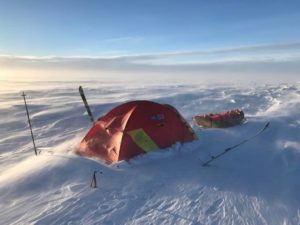 The first crossing of Antarctica by Dr. Vivian Fuchs in 1957-1958 was a mammoth operation. After years of planning, the expedition required a team of a dozen men, hulking cold-weather vehicles and 99 days of effort. Nearly 60 years later, modern day explorer Mike Horn has repeated the feat in a fashion unfathomable in Fuchs’ day. On 7th February, he finished an unsupported, solo, ski traverse of Antarctica. And it took him just 57 days.

Horn’s feat, impressive in its own right, is part of a project far grander in scale titled Pole2Pole. Over the course of two years, the plan is to circumnavigate the Earth, crossing both Poles and covering 24,000 miles over six continents, by foot, ski, car and boat.

At 50 years old, Horn is an adventurer in the same vein as Sir Edmund Hillary, Ernest Shackleton and other legendary explorers of the last century. He conceives of the biggest projects imaginable and has the wherewithal to see them through. Past expeditions include 18 months circumnavigating the Earth along the Equator without motorized vehicles; summiting Makalu and Broad Peak, two of the 14 peaks in the world over 8,000 meters high; and becoming the first person to reach the North Pole in winter using only human powered transport.

The Antarctic crossing was always bound to be one of the most dangerous and trying legs of the Pole2Pole Expedition. Horn set out on his skis from Novolazarevskaya, a Russian Antarctic Station, trailing a sled weighing approximately 200 kilograms — all the supplies and sustenance that he would need for the continental traverse.  In a blog post on his website, Horn was quoted as saying about his planned route: “It [has] never been done before! But the aim of this traverse is not to beat any world records. The aim is to draw attention to the fragile environment, and as an explorer, to extend my knowledge and discover the limits of human capabilities.”

During his 57 days on Antarctica, Horn endured temperatures as low as -40˚C and winds as high as 300 kilometers per hour. (The winds however had their upside: he was at times able to use specially designed snow kites to move faster than he could have otherwise.) In all, he traveled some 5,100 kilometers from Novolazarevskaya to reach the other side of the continent.

The next stages of Pole2Pole will take Horn through various Pacific Islands, Australia and New Zealand, and Papua New Guinea, among other locations. At some point, he’ll find himself at the diametric opposite of the South Pole in the Arctic North. And, finally, at some indeterminate date in the future, he will arrive back in Monaco, the place where he set sail to start his trip.

But that’s a ways away. Mike said about his project, “The aim should not be to reach the summit or the pole” — or even just Monaco, perhaps, — “these should simply be my halfway marks.” The consummate explorer that he is, for Horn it’s about the journey, not the destination.

Feature Image taken from Mike Horn’s Facebook page, when he had another 330km to go to complete his journey. Photo © Mike Horn