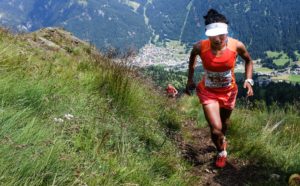 The Incredible Story of Mira Rai—Adventurer of the Year 2017

Mira Rai was born in eastern Nepal, where she joined the Maoist Army at the age of 14, before stumbling upon trail running by chance.

With natural talent and a little bit of luck, she’s become a national icon for Nepal, captured hearts worldwide and was just named National Geographic’s Adventurer of the Year 2017.

It had been just a year since Mira Rai, discovered trail running, quite by chance, after meeting two morning runners one day and agreeing to meet them again on a Saturday morning to do a training run. The run turned out to be the start point for a local 50km trail race, part of the Himalayan Outdoor Festival.

Mira completed the course. With more than 3000m of climbing, rain and a hail-storm that washed away course markings and left her cotton t-shirt soaked, she finished in nine hours. She won first prize by default as the only female participant, as is so often the case, and took $100 and a pair of Salomon shoes home with her. My first contact with her was when she wanted the spelling on her certificate changed from “Meera” to “M.i.r.a.”

Later, after the results were published on the event website, I saw the photo of Mira taken at the prize giving. It’s a study in delight. Two rows of white teeth are exposed and you can see the strain in the face muscles needed to produce such a wide smile. A firm handshake with the prize giver out of frame, a medal, t-shirt and certificate in hand. It was the moment captured in that photo that made me wonder, “Just who is this woman?” That was the beginning of the story of ‘Mira Rai – the Ultra Runner’—a story that has captured imaginations and inspired people around the world.

Mira’s family home is in Bhojpur in east Nepal, far from Kathmandu. We’re travelling with a French TV cameraman who is making a short film about Mira. After a 40 minute flight, buffeted by the thermals from the unending hilliness below, it’s still a day’s drive on the roughest of tracks to reach her home

.
It is about as simple as homes get, built from bamboo, straw, mud and stones with a solar panel perched on the thatched roof. Mira loves this place.

She animatedly shows me around the land, jumping from rock to rock, where she used to cut grass with her friends, the trees and cliffs she used to climb, the spring way down the hill where she hauled containers of water from, and the school yet further down which took half an hour to reach with a child’s legs. She refers to the hill up from her house as “my mountain”. She’s at ease with everybody there. She has the confident air of “girl done good”—someone who’s returned from afar having made their fortune, which, in the context of these three or four houses on a hillside, she is well on her way to doing.

While Mira is happy to visit home, her “beautiful place”, it’s clear that life here is tough agricultural toil with no other opportunities. “It was a life people consider hard, but now I think it was really good training!” she says with a shrug. When the family’s land was not enough to provide food, Mira would walk with her mother on a pre-dawn till post-dusk journey to buy as much rice as they could carry on their backs to sell in a small market some hours from home. As we drive along, we see a mother and two daughters walking on the dust road with heavy sacks on their backs. Mira says, “This was like me and my mum when I was small!”

At around 14, in the last years of Nepal’s ten-year civil war, recruiters came to her village, and seeing this as a ‘chance’, she went with them.  She told her mother she’d be back in a couple of days, but was only in contact seven months later, and returned only two years later.

“I’d always wanted to leave my village and do something with my life. The Maoists said they would give me opportunities, and that women and men were treated equally.”

Sport was important in the Maoist army. While photos of Mira posing with a substantial machine gun have been printed in the media, she saw no fighting, but rather did a lot of cooking, cleaning and sports, including karate, volleyball and running.

After a peace accord was signed, the Maoist army was due to be merged with the state army, but Mira was disqualified from this process and drifted home. It was only years later, after completing her school leavers’ certificate and an agriculture course, that she came to a point of decision to go to Malaysia to work in a factory. Her former karate instructor believed this was not the right thing to do, and invited her to stay with his family in Kathmandu and have one last try at finding success in competitive running. It was as her money was all but finished, and she was about to give up on Kathmandu to return home, that she stumbled across the trail race.

A running friend and I met Mira a week later in a greasy-walled tea-shop near the national stadium. Desperate for more female participation in this sport, we wanted to know, would she be interested in doing more trail running?

I remember Mira’s confusion—we were telling her that she had accidentally discovered that “hilly up-down running,” as she would later call it, was actually a sport elsewhere in the world, and one of the most rapidly growing ones.

Despite 68% of Nepal being either Himalayan mountains or its foothills, competitive running in Nepal is generally done on flat terrain, on roads or track, which was why she was in Kathmandu, to try her hand at competitive running. When someone’s stated goal is clear and simple, it’s easier to offer help. At the time, we had no real idea what to do with her, but agreed to fund her stay in Kathmandu, and decided that we could figure the rest out later. We couldn’t have imagined that her name would soon be known in the trail running community worldwide.

Mira’s always said, “I will try,” to any suggestion and then worked hard. Opportunities were hacked together with the help of friends and strangers. Used running equipment was found, a training plan was written, English classes set up, and a cheap bicycle bought to navigate the city. Her running improved through training, but there were no races to work towards. And Then There Were Races

Mira is a diminutive 152 cm and 50 kg—a perfect size for endurance running. She walks on her toes; her heels touch the ground only when she stops. Her ponytail bounces rhythmically as she runs, she whoops, arms flailing around running down hill, not too unlike a child at play, expressing her enjoyment of running and being out in nature. On training runs in Kathmandu, dressed in tight lycra leggings, she’d encourage women to try running for health and “feeling fresh”. There was more to her as a runner, than just running.

In the summer, an Italian woman, Tite Togni, had offered to host a Nepali runner called Upendra in Italy for a month, to give him the chance to compete in several top level races. She extended the offer to Mira, “Why not?” she said, “she deserves it,” and a crowdfunding effort paid for the flight and visa.

By the end of August, Mira had arrived in Europe, and within two days attended as a spectator, the Ultra Trail du Mont Blanc (UTMB), one of the biggest trail running events in Europe. Several photos showed Mira looking wide eyed and out of place, but rapidly absorbing what this sport that she had stumbled onto was all about.

Tite took Mira home to Italy, and got her training. Mira won a 57 km race and broke the record. “Relax enjoy running!” she said when asked if it was hard. A second win followed in an 83 km race. It seemed like everything she touched turned into a victory. When she returned to Nepal, her confidence had grown, and this unique character, Mira, had blossomed.

Next, Hong Kong, where over four months she won three competitive races, and came second to a former world champion in another. With her propensity to laugh frequently and at anything at all, she warmed people to her quickly and easily, making a positive impression on pretty much everyone. In her races, Hong Kong was rooting for her. Her final win in Hong Kong gave Mira the title of Asia SkyRunning Champion, 11 months after her first race, and the equipment brand Salomon took her under their wing.

Mira’s first big European race was in July 2015—the Mont Blanc 80 km, a famous course around the stunningly beautiful Chamonix valley. Sixteen months after chancing upon trail running, she won the race, one of Europe’s most prestigious, beating the course record in front of crowds, sponsors and the assembled press. Resting after the race she called me on the phone. In a tiny voice muffled by the bedclothes of a plush chalet in Chamonix, she reflected, “Why has this happened? Why me? I don’t understand.” Her voice switched between tones of amazement and confusion, appealing for some explanation about how her life had changed so rapidly.

Back home, Mira’s finish-line picture in her blue running outfit holding Nepal’s flag aloft, made the front pages, the first female athlete to do so in Nepal’s history. “She’s done something good for the country,” said a newspaper seller looking at the photo. This positive news stood out starkly from the limitless flow of tragic news about the earthquake, and made Mira a celebrity, a symbol of what Nepal can achieve given the chance.

While talent and attitude count for so much, it can be wasted without an opportunity. Had Mira gone to Malaysia to work in a factory, the world would have missed out on watching her story unfold, a story that is still unfolding. Mira once compared opportunities to a leaf on a flowing river, “You have to grab it quick, or it’s gone forever,” and when she learns of a new opportunity, she says everytime without fail, “I will try hard.”

This story was a part of the Opening Feature of The Outdoor Journal Summer 2016 edition.