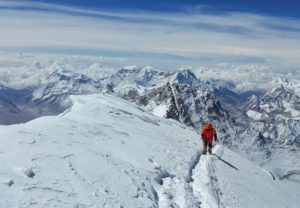 Nearly 563 climbers made it to the top after a two-year gap. Seven people have been reported dead. On the 63rd anniversary of the first ascent of the big mountain, we take a look at the 2016 spring climbing season on Everest.

The Spring season on Everest got over last week and nearly 563 climbers made it to the top, with seven deaths reported so far.

This season, 289 permits were issued to 32 different teams. It was a safer year on Everest in comparison to previous seasons. The death to summit ratio was nearly 1.25%. A total of seven people have died this season from both the North and South side of the mountain.

The people who succumbed include Eric Ary Arnold, a 35-year old Dutch triathlete and Dr. Maria Strydom, 34-year old Australian academic vegan climber. Both died on 20th and 21st May respectively while descending the mountain. Their bodies were recovered by a team of 13 Sherpas. Dr. Maria suffered from snow blindness followed by a stroke near Camp 4.

Two Indians, Paresh Nath and Goutam Ghosh, who went missing 21st May, were found dead on “The Balcony”, a small platform at 27,600 feet.

Another Indian succumbed to altitude sickness on 23rd May while descending the mountain. Two others who died include a Sherpa (while fixing ropes for Lhotse) and a climber on the North side of the mountain.

In 2015, a 7.8 magnitude earthquake struck Nepal and triggered an avalanche from Pumori at Everest Base Camp which left 22 people dead. In 2014, sixteen Sherpas died in an avalanche while working on the Khumbu icefall at the beginning of the season. The season was called off after this tragedy. In 2013, a brawl between three professional European climbers and Sherpas also gathered headlines around the world.

Everest was summited for the first time in two years by nine Sherpas who opened the route to the summit on 11th May. The crowd followed after that.

Initially, the first summit window was forecasted on 14th-15th May and 19th-20th May.

The first foreign climbers this season, two British and one Mexican climber, David Liano, reached the summit on 12th May. The British mountaineers were Kenton Cool and Robert Richard Lucas. Kenton Cool made his 12th Everest summit (a British record holder) this year, a great inspiration as a fall from a rock face bound him in a wheel chair two decades ago.

Long queues were reported given a very short summit window on the mountain and climbers rushed to the top which was left untouched for the past two years.

The Khumbu Icefall had only seven ladders this year; it usually has 20.

2015 was the only year after 1974 when no summit was made from either side of the mountain.

Everest has become an epitome of gratitude for the climbers who spend almost every summer in its lap. Many challenge themselves in various ways like summiting without using any supplemental oxygen, sprinting up the mountain, etc. Many do it for breaking and creating new world records. The equal amount of unforeseen risks and challenges are always there.

According to Gyanendra Shrestha, an official at the Department of Tourism, Nepal, two Sherpas, Mingma Chhiri Sherpa and Pasang Tenzi Sherpa, have applied to climb Everest thrice in this same season.

Mingma, a 19-time Everest summiteer was in a bid to set the world record for the most Everest ascents. Apa Sherpa and Phurba Tashi Sherpa together hold the record presently for the most summits of Everest – 21 times. Mingma Chhiri Sherpa was one of the nine Sherpas who first reached the summit on 11th May.

The most followed Snapchat account from Everest by Adrian Ballinger and Cory Richards with the hashtag #EverestNoFilter was also a point of attraction this season. The duo was documenting their journey and sending small videos of their experience without any supplemental oxygen expedition. Cory Richards successfully made it to the summit from the North side without any supplemental oxygen while Adrian had to turn back.

Other climbers who made it to the summit without any supplemental oxygen were Melissa Arnot (first American to do so and surviving the descent as well; it was her sixth Everest summit), Thomas Lammle, David Roeske and Carla Pérez from the North side and Azim Gheychisaz from the South side.

The only female high-altitude worker, Maya Sherpa, climbed Everest on 21st May becoming the first Nepali woman to summit from the South side this spring season.

According to a Kathmandu based publication, the competition among low-cost local companies in Nepal is chasing a business that has boomed in recent years and is no longer dominated by international outfits has meanwhile undermined safety standards. Some companies, charging around USD 30,000 a climb, or half that of high-end firms, are known to have sent relatively inexperienced climbers up the mountain without medically-trained guides. “There is this exponential growth in organizations offering guiding services on Mt Everest and because there are so few internationally qualified guides in Nepal, it means the companies are engaging less and less in skilled workers,” said veteran climber Andrew Lock, the first Australian to lead a commercial expedition up Mt. Everest. Some people pay up to USD 45,000 to be on the top of the world.

Given a short summit window, the long queues and slow climbers put many lives at risk. Climbers had to wait for almost an hour by the side of the queue to let others pass first for the summit.

A vegan climber from Mumbai, India, Kuntal Joisher shared his summit experience with The Outdoor Journal on phone from Kathmandu, “The hardest part was from Camp 3 to the summit as I got only three hours break at Camp 4. Camp 3 was lower this year than it usually is. The passage below the summit is very narrow and I had to let the members of other teams to pass by while I waited for an hour and half. The climbers descending after the summit were also obstructing the way. 202 climbers summited on the same day as I did.”

According to Alan Arnette’s website, record crowds in 2012 created insufferable lines above Camp 3 and at the Hillary Step fueling global discussion that Everest management was in need of serious changes.

This year is the 63rd anniversary of the first summit of Everest. The first ascent of Everest was a major event in the history of mankind and a true spirit of adventure and exploration. Sir Edmund Hillary and Tenzing Norgay Sherpa reached the summit on 29th May, 1953 from the South side.

Everest Expedition 1953 Trivia
The British 1953 Everest expedition carried a two-inch mortar for use as an avalanche gun. Their theory was that if John Hunt and his men encountered slopes burdened with snow, they would create a controlled avalanche with the mortar. The mortar was never used but on the way back they fired off the 12 mortar bombs in an impromptu firework show.
– From The Adventurer’s Handbook by Mick Conefrey

The first summit at the North side was made on 25th May, 1960 by a Tibetan climber Nawang Gombu and Chinese climbers Chu Yin-Hau and Wang Fu-Zhou. A lot has changed since then in the style of clothing, equipment, number of climbers and it has now become a “business”. People have used it as a platform to gain popularity and creating records. There is no denying to the fact that many have done it purely out of passion and for the love of the mountain. An average expedition on Everest takes about 39 days. There are in total 18 climbing routes on the mountain.

The information below has been sourced from the Alan Arnette’s website which is widely considered as a respectable chronicle on Everest.