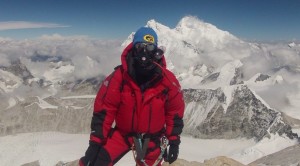 Arjun Vajpai was at the Advance Base Camp of Makalu when the earthquake struck.

Though there were no deaths on this mountain, the jolt and avalanches were enough to call off the season’s climb.

Indian mountaineer Arjun Vajpai returned home on Tuesday after surviving the killer earthquake that claimed thousands of lives in Nepal including 19 people when an avalanche struck Everest Base Camp (EBC).

The 21-year-old was attempting Makalu third time in as many years with a team of eight other international climbers. Makalu is the fifth highest mountain in the world (8,481m), located 19 kms southeast of Everest, on the border of Nepal and China.

Talking to journalists at his hometown Noida near Delhi on May 5, the 21-year-old narrated the ordeal where in he witnessed the fury of the earthquake on the high mountain, daily tremors, avalanches and the heartbreak of turning back when the climbing season was called off.

“I had never realized the aftermath of an earthquake on a mountain. I was sitting in the communications tent at the Advance Base Camp (19,500ft) with few other climbers when the earthquake struck. We felt we were suffering from high altitude sickness. When another tremor came, we were sure something was not right and then there were avalanches and rock falls. Small crevasses were opening up and a huge chunk of ice fell just beside our base camp from above. I could see the mountains dance,” said Arjun, tanned and tired on his return from the Himalayas.

This year, 60 climbers from 11 teams were attempting Makalu. Arjun’s previous two summit attempts were unsuccessful due to shortage of rope and inclement weather. This year, nature was at its worst. “Immediately after the quake, I used the satellite phone to inform my parents of my well being. I also made videos and dispatched them promptly to news channels. This way, the rest of the world was aware of the situation on Makalu,” said Arjun, who topped Everest at the age of 17.

After the initial commotion settled, Arjun and other climbers set out to rescue porters who were on their way up Makalu at the time of the tremblor. “It took 12 hours to hear from our other team members at Camp 1 and 2. It was a relief to know there was no casualty,” he said.

Given the shaky ground that they were all standing on, all teams at Makalu soon decided unanimously to cancel their expeditions. “The euphoria for summit would not have been there. It didn’t seem right morally,” said Arjun. Enroute down the mountain, his team was stuck at Hillary Base Camp (17,384ft) and couldn’t descend as route down was damaged.

The Nepalese Army had to abort an evacuation mission on May 2  due to bad weather forcing Arjun and his team to descend another 3000 ft till the chopper could finally reach them, he said.

Refusing to stay in the shadow of two botched attempts on Makalu, Arjun hopes to get lucky in his next attempt of the big mountain. “Makalu is not just a mountain for me now. Fate is testing me. I will go there again next year, ” he said, the burnt and flaky skin revealing a smile.