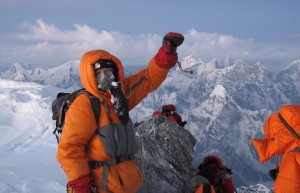 Mountaineers who had to abandon their Everest expedition last year are now allowed to use their climbing permits till 2019.

The Nepalese government has extended Everest permits of 334 mountaineers who had to abandon their expedition last year, AFP reports.

Mountaineers had to abandon their Everest attempts last year when Sherpas went on strike after a deadly avalanche near Everest Base Camp claimed lives of 16 Sherpa guides.

According to sources, the permits will remain valid till 2019, allowing climbers time to plan a new expedition to the world’s highest peak. However mountaineers will have to pay an additional $1000 each to comply with the current permit fee of $11,000 per climber.

Everest climbing season begins in April and goes on till end of May.

“The cabinet has decided to extend the permits of all climbers who were unable to climb last year — they can come back with any company they want over the next five years,” said tourism ministry spokesman, Mohan Krishna Sapkota.

In addition to extending the climbing permit, the Nepalese government has planned on providing safety measures to climbers, which include changing the route and improving weather forecasting, while not giving clarity on a formal rescue plan for Sherpas in case of an accident.