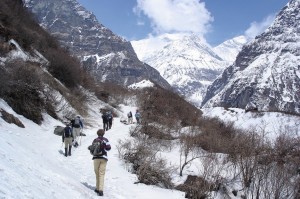 The plan that will cost millions includes repair of damaged trekking trails and creating alternate trekking routes in Manaslu and Langtang region.

Nepal’s Ministry of Culture, Tourism and Civil Aviation (MoCTCA) has created a Tourism Recovery Action Plan including immediate, mid-term and long term reconstruction programs for the recovery of the industry tha tis going to cost them millions of rupees.

Tulsi Prasad Gautam, mountaineering chief, MoCTCA told The Outdoor Journal over telephone, “We have sent a proposal to the Prime Minister’s Office and the Ministry of Finance, seeking Rs. 800 million for recovery of the industry. This includes repair of damaged trekking routes and reconstruction of hotels and guest houses, among other things.”

“We created a Tourism Recovery Committee three days after the first earthquake. We have already sent a team to survey all the trekking trails, and are assessing the situation in Khumbu, Manaslu, Langtang, and Cho Rolpa, and are hoping to come up with alternate routes in Manaslu and Langtang region.”

When asked how long would it take to recover tourism in Nepal, Ashok Pokharel of Himalayan Journeys said, “We are trying to salvage the bookings for treks in September, October and November. Nepal has not faced such a crisis before, and the economy depends a lot on tourism. We haven’t got the figures yet, but the estimated loss is pretty big.”

“We are pretty confident that tourism will bounce back,” he said.

The 7.8-magnitude earthquake that shook the Himalayan nation claimed over 8000 lives and caused avalanches on Everest killing 19 people at base camp. Villages in Manaslu and Langtang, areas well known for their trekking routes were severely damaged. The avalanches on Everest and continuous aftershocks led to climbers to call off their expeditions, although the government has not officially called it off yet.

The 7.8 earthquake was followed by another major earthquake on Tuesday, causing further damage to the region.