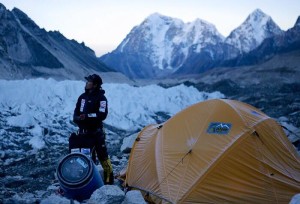 Japanese climber Nobukazu Kuriki will be attempting Everest (south side) this autumn, which opens to climbers for the first time this season after the earthquake.

Nearly four months after Nepal was shook by twin earthquakes that claimed 19 lives on Everest and 9000 overall, Nepal’s tourism ministry has declared climbing season open for climbers attempting the 8000er.

According to a report on Associated Press, Japanese climber Nobukazu Kuriki was handed over his permit by tourism minister Kripasur Sherpa in a ceremony in Kathmandu on Sunday.

“The main purpose of my climb is to spread the message that Nepal was safe for climbers and trekkers even after the earthquake,” he was quoted telling reporters present.

Mr. Kuriki, a 33 year-old entrepreneur from Hokkaido, Japan will be attempting Everest for the fifth time in autumn. In his previous climb in September 2012, he attempted the big mountain  solo via the West ridge without supplemental oxygen. He had to abandon the attempt owing to high winds and extreme cold. He lost nine fingers to frostbite. All of his previous autumn attempts have been unsuccessful so far.

Icefall doctors are Sherpa specialised in route-setting on the glacial region of Khumbu, an area that was destroyed after the earthquake.

For most climbers, spring season (April-June) is the most popular time to attempt Everest. Although it is possible to summit the mountain in autumn, climbers avoid it due to high wind, cold weather and shorter days.

Bochi-Bochi, an adventure tour company based in Kathmandu has organised Mr. Kuriki’s expedition this time.

“Mr. Kuriki will be climbing via the South Col, accompanied by four climbers, which includes a filming crew till Camp 2,” explained Sitaram Gurung, an employee of Bochi-Bochi over telephone to The Outdoor Journal.

“Sherpa support will be provided till Camp 2. After that, Mr. Kuriki will be going on his own,” he said.

According to a post on his Facebook page, Mr. Kuriki will be attempting to climb Everest solo without supplemental oxygen.

“The Nepal government has given 11 permits to climbers so far, including Everest and Manaslu,” Ang Tsering Sherpa, president of Nepal Mountaineering Association (NMA) told The Outdoor Journal.

“There are a total of 403 peaks open to climbing in Nepal. Out of these 376 are managed by Nepal’s government and 27 peaks by us,” he said.

Nepal’s tourism ministry launched a tourism recovery plan earlier this year, in a bid to bring back tourism to the country, that forms a major part of the country’s economy.