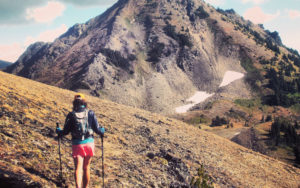 To set a speed record running through remote mountains, often days at a time, represents the ultimate test of one’s abilities. The new Ultimate Direction FKT Grant offers some of these athletes the opportunity to test their mettle on bold objectives and raise the bar by setting new speed records…if they can.

Ultimate Direction, La Sportiva and GU Energy Labs have teamed up for an exciting new award for the fastest of the fast: the FKT Grant. FKTs—fastest known times—”have have become really popular” in the world of trail running, writes Buzz Burrell, one of the coordinators of the FKT Grant, in a recent blog post about the new initiative.

The inaugural Grant provides $1,000 each to individuals with ambitious plans to challenge or set records on North American trails. A total of 315 applications for the grant were whittled down to just four winners: David Anderson, who will attempt the Winder River Traverse; Andy Gohlich, who will attempt Norman’s 13; Heather Anderson, who will run the entire Colorado Trail, unsupported; and Samuel Jurek, who will seek the FKT connecting the Appalachian Mountain Club (AMC) huts in New Hampshire’s White Mountains.

Fastest known times typically involve superhuman feats of endurance running, biking or other human-powered sports. Notable examples include Karl Meltzer’s speed record of 45 days, 22 hours and 28 minutes on the 2,290-mile long Appalachian Trail; Stefan Griebel and Anton Krupicka’s 9-hour-and-6-minute FKT of the Long’s Peak Triathlon, a round trip from Boulder, CO to the top of Long’s Peak involving 79 miles of biking, 14 miles of running and 1,700 feet of technical rock climbing; and the late Dean Potter’s FKT on the round trip from the floor of Yosemite Valley to the summit of Half Dome in two hours, 16 minutes and 52 seconds. The Ultimate Direction FKT Grant requires recipients to undertake projects that are at least half running- or hiking-based.

For the Wind River Traverse, David Anderson, a climber of 35 years with significant experience pioneering new routes, will try to summit all 40 of the peaks along the Continental Divide in Wyoming’s Wind River Range. In his grant application, Anderson wrote, “The traverse will include over 40,000ft of elevation gain and descent.”

Andy Gohlich’s project, Norman’s 13, will mark a new link-up that has never before been attempted, that entails linking all of the Sierra Nevada’s thirteen peaks over 14,000 feet tall, on foot the entire way.  Gohlich wrote in his application, “I am going to attempt this new FKT route because the Sierra Nevada have been so formative to my love for the mountains.”

Heather Anderson hopes to set a new FKT on the 500-mile long Colorado Trail (CT). Anderson wrote in her application, “Long distance trails are my passion in life. I’ve wanted to thru-hike the CT since I first hiked a section of it in 2006. I believe I can be faster than both the unsupported and self-supported FKTs.” Traveling unsupported means that Anderson will carry “all supplies from the beginning” of the trail and will not accept “assistance along the way.” (In his blog post about the winners, Buzz Burrell writes, “Note: the UD FKT Grants reserved one spot for a Woman; however, Heather was one of the top 4 overall vote-getters making that moot.”)

The fourth and final recipient of the 2017 grant is Samuel Jurek. He will try to set a new speed record on the White Mountains Hut traverse in the idyllic and deceivingly-serious White Mountains. Jurek’s explanation of the allure of FKTs captures the spirit of all this year’s winning projects: “There are no spectators, yellow ribbons lighting the way, aid stations, or a crowd to cheer you down the homestretch.  You have to continue on under your own volition.  Digging into the soul, these attempts are raw, authentic experiences that force an examination of vulnerabilities and access of true grit.”

Jurek will set off on his Hut-to-Hut FKT attempt in late June 2017, while the other three grant recipients all have plans to try their projects in September 2017. Check back here to see if any of the speedsters succeed in setting new records!