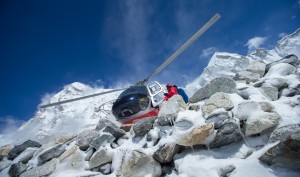 None missing on Everest; climbing season on South Col not yet called off – Nepal Tourism

The tourism ministry says all mountaineers evacuated from Camp 1 and Camp 2, and sherpas will resume setting up the route after a week.

Climbing season (on the south side) may go on.

Four days after an earthquake-triggered avalanche killed 19 people and injured dozens at the Everest Base Camp (EBC) in Nepal, all climbers and Sherpas from Camp 1 and 2 of the world’s tallest peak, and nearby peaks of Lhotse (8,516m) and Nuptse (7,861m) have been brought down to EBC.

Bishnu Prasad Gautam, Director General of Department of Tourism, government of Nepal told The Outdoor Journal over telephone today, “There are approximately 1000 people at Everest Base Camp, out of which there are 510 climbers. Out of those, 358 were climbing Everest, 118 Lhotse and 34 were attempting Nuptse.”

Giving a breakup of the casualty list, the official said, “Of the 19 dead, 14 were Nepalese staff, four were climbers and one was a trekker.”

He confirmed that no one from these peaks is missing, and all the critically injured have been flown down to safe regions.

Heli-rescue services had begun a day after the earthquake triggered avalanche struck Everest.

When asked whether the climbing season would continue, he said, “The Icefall doctors (Sherpa specialised in route-setting on the glacial region of Kumbhu) are scheduled to leave for Everest Base Camp after about a week for a recce to repair the damaged route to Everest.”

“Climbing would possibly begin again on the south side,” he added.

Meanwhile, reports confirm that the China Mountaineering Association (CMA) has called off the climbing season on the north col side.

‘The Mt. Everest Expedition for Spring 2015 on the North or Tibet Route stands cancelled,’ said a press note issued by Trascend Adventures, an adventure tour operator based in Hyderabad that conducts Everest expeditions.

According to the note, Nima Tsering, Vice Chairman of CMA told those present at the Base Camp that the circumstance demanded the decision, and added that the registration fee of this year will hold for the next three years.

With inputs from Yogesh Kumar