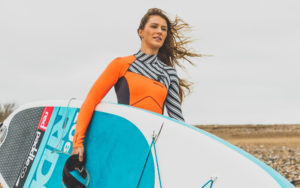 After surviving cancer, Lizzie Carr started searching for something more meaningful and exciting to do with her life than the job she no longer enjoyed.

When she discovered her dual passions for stand-up paddleboarding and advocating against plastic pollution, she knew she had found it.

On May 18, 30 year-old Brit Lizzie Carr became the first woman to stand-up paddleboard, solo, across the English Channel. In seven-and-a-half hours full of both rain and sun, placid waters and choppy seas, Carr paddled the 24 miles of open water between England and France. Carr’s feat—while not as extreme as, say, SUPing the Atlantic—is all the more remarkable because of her limited SUP experience, a personal path filled with adversity, and her unexpected motivation for paddling.

Four years ago, Carr decided to go on an adventure. She packed her bags and went traveling for a year. China. Russia. Sub-Saharan Africa. She went all over.

After returning home to the U.K., she received a major shock: she had cancer. She resumed her desk job but found it unfulfilling. The combination of the sabbatical and her diagnosis caused her to take stock of her life: “I realized that’s not how I wanted to be living. I wanted to do something that I felt was meaningful and that I was passionate about.”

Carr went and stayed with her father on the Isles of Scilly. While strolling along Scilly’s white sand beaches, Carr saw paddleboarders in the surf. “I was hooked instantly,” she says.

Back in London, she started SUPing whenever she could along the world capital’s waterways, where she made a discovery in plain sight. “You don’t really notice it walking around everyday, but when you’re that close to it in the water it’s unavoidable: the plastic pollution in our water was horrifying.”

After further research, she learned that some 80% of marine debris in the oceans are from inland sources. She had already found something she truly enjoyed in SUP, and now here she had found that something meaningful. “I came up with the idea of paddling the length of England through its connected waterways,” Carr explains. “It was 657 kilometers.”

Carr completed that expedition, unsupported, over 22 days in 2016. Along the way she endeavored to photograph and geotag every piece of plastic she saw with her naked eye. “It was a pretty big job,” she says. “It’s quite hard to paddle with both arms and take photos.”

That was the start of what she calls “Plastic Patrol.” “The idea is to expand upon the map that I created with a new app I just launched,” she says, with which people can geotag plastic pollution they observe in their own lives. In a blog post on her website, Carr explains the app’s goals further: “This has enormous potential to drive change, and the data we collect will help identify trends and hotspots so we can lobby for [resources] in specific areas and target clean up initiatives properly. We can use this to make real and immediate change.”

The idea to SUP across the English Channel was a logical next step to Lizzie after her 2016 expedition. It raised the stakes both in her paddleboarding and her Plastic Patrol advocacy. Partnering with Plymouth University, Lizzie planned to take water samples every fifth mile during her crossing that would be tested for quantities of microplastics.

Carr felt confident that her SUP abilities would get her across. The 657 inland kilometers she paddled on her 2016 expedition had gotten her strong and helped her build the necessary muscle memory. Leading up to the Channel crossing, she also tried to “pack lots of miles in training on the ocean,” to get a better feel for open water paddling.

Before long it was go time. The night before she set off was windy and rainy, rattling her nerves. But when she got to the coast off Dungeness, England at 7 am the next morning, the skies were clear. “A couple of dolphins were even jumping around my board as I started,” Carr says—a good omen, no doubt.

She made good headway at the start with the help of “a light and welcome tailwind.” Carr paddled, took her samples, and paddled some more.

Six hours later the good tidings of morning had morphed into ominous waves and dark skies. Carr did battle with a strong crosswind and an uneasy stomach: “I got quite seasick,” she remembers.

But then, when things felt most desperate, she saw the coast of France. “It was really motivating for me,” Lizzie says. ”I felt for the the first time in hours that I wasn’t just paddling for paddling’s sake—I was going towards something.”

Carr made landfall in Boulogne-sur-mer, France seven-and-a-half hours after leaving England behind. And while the dolphins bid her farewell, she was welcomed by a sea-lion popping his head out of the water a meter in front of her board. “A great way to finish the journey,” she says.

SUP has already taken Carr to new heights, both in and out of the water. What she does next is anyone’s guess, but one thing’s for sure: she’s never just paddling for paddling’s sake.