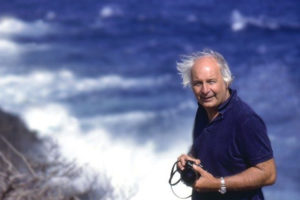 One of the Fathers of Modern Exploration, Folco Quilici, Passes at 87

Entire generations around the world were inspired by his documentaries and photos, alas, early this Saturday morning Folco Quilici passed away in Umbria, Italy.

Explorer, documentarist, photographer, novelist, screenwriter, he was not only Oscar-nominated for one of his documentaries, but also named by Forbes as one of the most influential writers in the world for his environmental and scientific contributions. He was commonly referred to as the “Cousteau of Italy” (who also passed at 87).

From a very early start Folco Quilici, born in 1930 of Emma Buzzacchi, artist painter, and Nello Quilici, an influential Italian journalist, had a whirlwind childhood. His father was shot down by friendly-fire in 1940 along with the heir-apparent of Mussolini, Italo Balbo, whom he was accompanying to Italian-held Libya. For years Folco was torn by this sudden loss and by the subsequent decades of conspiracy theories that revolved around the incident.

The last 4 pages of his personal diary, recovered from the wreckage, that were torn out before it was returned to the family, kept him asking questions that would never be answered.

The journalist pedigree and the unrelenting energy to ask questions, given his father’s death in suspicious circumstances, gave way to Folco starting a lifetime dedicated to exploration and documentation. Almost from the start, at barely 22 years old, in 1952, he set out with world champion diver Raimondo Bucher, and his wife, to the Red Sea to document underwater life.

In doing so, he directed the world’s first color full-length nature-documentary film, Sesto Continente (The Sixth Continent) which was released in 1954. For reference, Cousteau’s award-winning documentary, Le Monde du Silence (The Silent World), was released shortly after, in 1956.

While he was best known for this debut accomplishment and often associated to the sea, his real passion was mountains and would travel and document every range, as well as every other possible location in the world, over the next sixty years. From documenting the last cannibal tribes in New Guinea to some of the remotest villages in the Amazon, he took more than a million pictures over the course of his lifetime.

Like any world-renown explorer of his caliber, he was just as at home in a 4 Seasons hotel in NYC or on a haystack under the stars on a river in the middle of Zaire. During Folco’s “30,000 days” (more like 32,000 if we consider he was just a couple months shy of 88) on this planet and considering the lengths he’d go to in order to realise his documentaries and fulfil his assignments, even in the most remote and austere environments, he had numerous brushes with death.

Once in Turkey, he ran out of air while diving and was eventually rescued by an US Navy submarine. Again whilst diving, in the Maldives this time, he was swept away by an underwater current and was feared dead, only to be found days later on a deserted island on the brink of death from exposure.

I personally had the privilege of learning much of what I know today about scuba diving and underwater fauna thanks to a Summer aboard his ship in Greece when I was about twelve years old. Along with my father, I dived alongside him and his family, who are also explorers and conservationists, learning from one of the most generous and light-hearted people I’ve ever come across.

Between research dives and exploration, hopping from island to island in the Greek archipelago with his perpetually problematic boat, the Yavanos, we would document the local fauna, formations, and even wrecks. We would play with curious dolphins, catch and prepare octopus as well as bake giant groupers in salt crusts within makeshift stone ovens on the beach of whatever little bay we’d find ourselves in for the night. Under starlit skies I heard my first shooting star, so big and close, it literally ‘swooshed’ overhead.

One day while I was on anchor duty, I discovered a shipwreck a dozen meters below where we planned to set anchor. After further inspection we tried to recover some large brass fittings. Despite our best efforts, we didn’t manage to recover anything from the depths below but we did come away with a great “Indiana Jones” story. As recognition for my find I did, however, get to listen to the shared walkman for an extra ninety minutes the next day. Life is easier at 12.

Folco directed 22 films and wrote more than 25 books, won medals and awards from around the world, like the Silver Bear from the Berlin Film Festival, and directed dozens of nature and cultural full-length TV series. Most importantly, though, he inspired millions of people to travel, discover, and care for our planet.

In a recent, and possibly last, interview (currently in production) with us at The Outdoor Journal, we asked if he had a favorite destination.

Folco: I have a special place in my heart for India, I spent a year documenting the country in the 60s, but right now I’d like to just visit some nice little Meditteranean village… if such a thing exists anymore.

Lorenzo: Where would you want to explore next?

Folco: I find it fascinating, or paradoxical rather, that we’re sending probes to the farthest reaches of space, but we don’t know what’s right here beneath our own oceans.

Lorenzo: You’ve been in the center of modern nature documentary filmmaking, arguably one of the founders of it, what do you see and feel is the future of the environment and media?

Folco: People are informed about what’s happening to our environment, maybe even too much, but they take little or no action. I feel media does their job, but in the end, it is a cultural problem. Individuals don’t take responsibility for their behavior. I see it around me, people are becoming tired of hearing about environmental problems all the time. Nothing or little has been done in the end. Alas, we have to persist, even double our efforts, to keep informing everyone. It’s better than nothing.

This is only a part of the interview we had with Folco Quilici. When we left him a few months ago, he was working on a book about his travels and favorite places in Sicily. To the very end, he gave everything to his passion of travel and exploration.

A legend has indeed left us.

Stay in touch with us to stay informed of when the full interview with Folco will be published and to stay informed on international adventure stories and news. Feel free to follow and like us on our Facebook and Instagram as well, we love to share only the best and highest quality content.