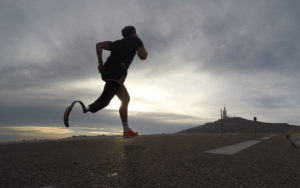 Three years ago, Charlie Lewis hobbled out of hospital leaving his right leg behind on the operating table.

Today, the Ironman’s weakness is knowing when to stop running. On Sunday, 23 April, he will tackle the London Marathon, as part of a mission to run in every country in the world.

“We got to Afghanistan a week before the race and couldn’t really see any women. And the women we did see, we didn’t really talk to or shake hands with. The interaction was limited,” says IronMan Charlie Lewis.

“But when we ran the marathon, it was like they broke free. It was incredible to see.”

He was in the “mountainous desert” Bamyan, far from his hometown, London. Perched in the highlands, 240 km northwest of Kabul, he and about hundred other runners lined up at the same spot as the Taliban in 2001, when they blew up the giant Buddha statues.

“It’s not a free country. People live in constant fear and threats of their lives, but they also run,” he says “So being there and getting the opportunity to be free, and be able to run a race, was really important to me.”

When he was 19-years-old, a snowboard accident shattered his life. Stealing his ability to move freely: “I was stuck in a body that didn’t want to do what I wanted it to do,” he says “From being a full 100 percent person, I went down to being a shell of myself.”

Ten years and multiple knee operations later, the unexpected turn still affected his life that once surrounded around running and rugby: “I got to a stage where I could walk around okay. But I couldn’t move quickly. So I had to go back to running,” he says, adding ”I never stopped running in my head, I guess.”

Thus, he decided to amputate his lower leg and try to get back on track with a running blade attached to his right knee. The 32-year-old says: “The reason I had my leg taken off, was so that I could run again. It was kinda my freedom. When you are physically held back by something, it’s incredibly frustrating for someone who moves.”

But the silver lining—being able to run—comes with a catch: the knee takes more pressure than it’s supposed to and is sensitive to damage.

On Instagram, followers see a picture of his bloody knee with the caption: “Sometimes you gotta sweat blood.. (&tears).” On the tracks, rather than push, he must hold himself back to not run himself into unnecessary injuries. “I guess, it’s always me, kinda not accepting that my body has certain limits. But I tend to run through it and deal with the consequences later,” adding “So it’s a learning curve—that I never think I will learn, to be honest.

“There’s a lot of energy that I have built up over those ten years and a lot of frustration. And now I’m getting it out,” he says and wants to explore his rediscovered freedom on a broader scale: “So it’s not just about the fact that I can run that’s freedom, but I can run across borders and go running in other countries to explore the world.

“I love to go to places, but I need a reason to go. Like North Korea. I wouldn’t have gone there unless there was a race.”

In North Korea, 60,000 people watched the marathon runners set off on a monitored course that they couldn’t deviate from. The contrast to the Afghan race was striking, where many local runners cheated: “They would run 5 km and then get on someone’s motorbike. Drive off. And then run a couple of kilometers,” Charlie laughs, adding “It was hilarious.”

He wants to race in every country in the world, and even though motorbikes aren’t part of the scheme, he says “it’s not just running,” adding, “I want to take part in other things.” Thus, races where camels, ostriches or horses are part of the scope, are on the horizon. He wants to get involved in local cultures and discover sports that are important to the people.

A couple of months ago, his eyes were set on the oldest nordic ski race in the world, Vasaloppet, in Sweden: “By using the cross country skiing, you are taking part not just in a sport, but a sport that is unique to that country, and important to that country,” he explains.

Baghdad, Somalia and the Wakhan Corridor which goes through Afghanistan, Tajikistan and Pakistan are on his agenda. Places where discrimination, conflicts or diminished rights threaten the freedom of the locals are also high up on the list.

Up next, he is going for the world record for amputees at the London Marathon on Sunday, 23 April. Together with a friend, he strives to complete the 42km course in three hours, and raise money for Right to Play and the Mines Advisory Group (MAG).

In the same way that many people never discover off-beaten gems like the Afghan desert, the charities’ work can go unnoticed. Charlie says: “MAG does exceptional work that nobody really sees because landmines are not there, they are hidden away. You [In the West] don’t see people blown away from landmines and you rarely hear about it. It’s a hidden thing and a hidden charity,” adding “You wouldn’t think landmines would be a problem in today’s society, but there are so many in so many countries.”

There are also many stories that have never been told or heard, and on his racing quest he sheds light on the non-touristy tracks: “In Afghanistan, for example, they don’t see a lot of western people. You are a foreign face and most of the western people they see are army. So the race is really important because you are running with them. You are high-fiving and bonding.”

Being one of the few international runners at the race, he says on a final note, “It felt a bit like being in London. Such a diverse group of people to look at. But of course, it’s not diverse. They are all Afghans, but they have so many different descendants.”