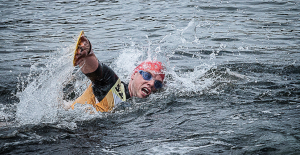 The swimrun consists of 31 kms trail running topped with 5.5 km open water swimming around the island of Utö.

Swimrun is one of the fastest growing sports where the athletes, in teams of two, alternate trail running and open water swimming. There is no time to lose – one runs in the wetsuit and swim with shoes on.

Utö Swimrun, on May 31, is half the distance of the gruelling ÖTILLÖ but it is still considered a hard fought challenge in the cold spring water of the Baltic Sea.

The battle at the front will be tough with last year’s winners Björn Englund and Marcus Hultgren ready to defend their title but with different team mates. ÖTILLÖ- winners and world champions Lelle Moberg and Daniel Hansson (Swe) will give tough competition, as will the brothers behind the idea of ÖTILLÖ, the Utö locals Mats Andersson and Jesper Andersson Mars, racing on their home trails.

The resilient mother and daughter Bibben Nordblom and Charlotta Nilsson of Sweden are reigning world champions in the women’s class and will be hard to catch for the 22 other all female teams.

In the mixed class, last year’s winners Jasmina Glad-Schreven and Thomas Schreven from Finland/Netherlands will meet Sweden’s biggest hip-hop artist Petter Askergren who once again will challenge himself against 47 other mixed teams, this year with his wife Michaela Fröstad Askergren.

About ÖTILLÖ – the Swimrun World Championship
ÖTILLÖ is regarded as one of the toughest endurance races in the world. It is the original swimrun competition with a total of 75 km. Teams of two run 65 km on 26 islands and swim 10 km between them in the Stockholm archipelago in Sweden. ÖTILLÖ is one of the most prestigious endurance races in the world and is the World Championship in swimrun racing.