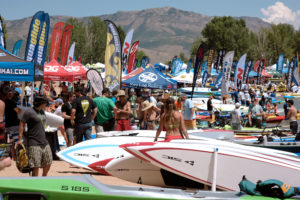 Following on the Trump administration and a Republican congressmen’s actions and rhetoric threatening public lands in Utah, Outdoor Retailer has officially started searching for alternative host locations for both its winter and summer shows beginning in November 2018.

OR has historically operated out of Salt Lake City, UT.

UPDATE on February 17, 2017: After a curt and ineffective conference call between Outdoor Retailer, Outdoor Industry Association (OIA), Patagonia, The North Face and REI and Utah Governor Gary Herbert, Outdoor Retailer will end its ties with the state after next year’s shows. In a statement, the OIA said that “what we heard from Governor Herbert was more of the same. It is clear that the governor indeed has a different perspective on the protections of public lands from that of our members… and it’s bad for our businesses.” A spokesman for Governor Herbert called the decision “offensive.”
“Salt Lake City has been hospitable to Outdoor Retailer and our industry for the past 20 years,” says Marisa Nicholson, show director for Outdoor Retailer, “but we are in lockstep with the outdoor community and are working on finding our new home”.
Check back here for any future developments as the search for a new location continues.

UPDATE on February 10, 2017: Just days after Patagonia announced that it will not participate in future Outdoor Retailer events in Utah, three other companies—Arc’teryx, PolarTec and Metolius—have followed suit.  A post on the Arc’teryx blog states that, as “a company that has long supported preservation of wild spaces,” Arc’teryx will no longer attend Outdoor Retailer in Salt Lake City, UT, “due to the state’s efforts to rescind protection of Bears Ears National Monument and other public lands.” The post continues, “Funds that would have been spent to attend Outdoor Retailer in 2017 will be reallocated to the Conservation Alliance’s new Public Lands Defense Fund.” PolarTec, a textile manufacturer, released a statement similar to both Arc’teryx and Patagonia’s in tone, noting that its decision was “made in solidarity with PolarTec customer Patagonia.” Climbing equipment manufacturer Metolius echoed these sentiments as well in a statement released on its Facebook page: “[We] intend to stand with Patagonia and Arc’teryx and not attend or support the Outdoor Retailer show in Utah. We look forward to rejoining Outdoor Retailer once a host state that has been found that values our sport.”

Outdoor Retailer (OR) runs two of the largest trade shows for the outdoor industry each year, providing companies a platform from which to debut new products and initiatives, and industry professionals a place to plan and network.

On February 6, Outdoor Retailer announced it would “solicit proposals for venue locations for shows and events scheduled for November 2018 and beyond.” This decision was largely motivated by Utah Governor Gary Herbert’s signing of a resolution asking President Trump to undo President Obama’s actions that declared Bears Ears National Monument. Bears Ears National Monument, located in San Juan County, UT, encompasses over one million acres, with many areas sacred to Native American tribes. The striking desert landscape and sandstone cliffs are a popular recreational destination for hikers, climbers and sightseers.

Governor Herbert and Utah legislators’ stance has provoked vocal outcry from leading outdoor industry companies such as Patagonia and Black Diamond. The day after Outdoor Retailer put out its call for location proposals, Patagonia’s CEO and President Rose Marcario released a statement announcing that “Patagonia will no longer attend the Outdoor Retailer show in Utah and we are confident other outdoor manufacturers and retailers will join us in moving our investment to a state that values our industry and promotes public lands conservation.” Marcario accused Herbert and the Trump administration of showing “blatant disregard” for public lands.

The announcements by OR and Patagonia are intended to put pressure on Herbert and other Utah legislators to reverse their position on Bears Ears National Monument and, ideally, deter lawmakers from curtailing public land preservation efforts in the future. OR has been an economic boon to Utah’s economy, bringing in tens of thousands of travellers and hundreds of millions of dollars in the two decades it has called Salt Lake City home.