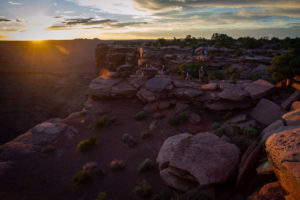 After weeks of threats, protests and one unproductive conference call with Governor Gary Herbert, Outdoor Retailer has officially stated they will not consider Utah as a host for future shows.

In an about-face, Outdoor Retailer (OR) has stated that it will seek proposals for alternative locations exclusively outside of Utah for future trade shows. The decision comes after weeks of boycotts and debate, and the Outdoor Industry Association’s (OIA) Executive Director, Amy Roberts, met with Utah Governor Gary Herbert on Thursday, February 16, to discuss the state legislature’s positions on public lands policies.

In a brief statement on Friday, February 17, OR explained: “Today officials from Outdoor Retailer, Outdoor Industry Association, Patagonia, The North Face and REI met via teleconference with Utah Governor Herbert. In light of the outcome of the call today, Outdoor Retailer will not include the state of Utah in the RFP process for future show locations.”

The biannual Outdoor Retailer trade show has called Salt Lake City, UT home for 20 years. In recent editions, the show has been brought in an estimated $45 million and 45,000 visitors to the state each year. After leading outdoor industry companies such as Patagonia, Arcter’yx, PolarTec and Metolius announced their intention last week to boycott future OR shows in Utah, Outdoor Retailer released an earlier statement clarifying its intent to seek alternative locations, but at that time did not explicitly exclude Utah from consideration.  The OR boycott was sparked by lawmakers in the Utah legislature supporting policies that seek to dismantle public lands protections. Notably, Governor Herbert signed a resolution urging President Trump to rescind President Obama’s designation of Bears Ears as a National Monument.

In a statement about the call with the Governor, the OIA said, “Unfortunately, what we heard from Governor Herbert was more of the same. It is clear that the governor indeed has a different perspective on the protections of public lands from that of our members.”

Also on the call between OIA Executive Director Amy Roberts and Governor Herbert were representatives from Outdoor Retailer, The North Face, Patagonia and REI.  On behalf of the outdoor industry, Roberts relayed four demands to Governor Herbert: (1) That he disavow any “support for the sale or transfer of America’s public lands to the states and cease legal action to that effect;” (2) that he abandon “any effort to nullify the Antiquities Act, an authority that grants Congress the ability to designate public lands;” (3) that he renounce any efforts to encourage the reversal of “the designation of the Bears Ears area as a National Monument;” and (4) that he “embrace and actively support the outdoor recreation economy’s role in the state by supporting the public lands that provide the backbone of the industry’s sales.”

With too much daylight between the Governor’s positions and their own, Roberts and the other companies’ representatives determined that there was no choice to but to send a clear message to Utah legislators by supporting the relocation of the OR the trade show.

The developments of the past two weeks kicked into high gear following the initial OR boycott by Patagonia. After further companies joined the boycott, a growing chorus of companies began arguing that the best way to protest Governor Herbert’s agenda was in fact to attend OR in Salt Lake City, UT, and to stand together in solidarity. The North Face, REI, Cascade Designs and Thule, among others, released statements saying they would indeed attend this summer’s trade show in Utah. In a letter published on the company’s blog, REI’s CEO Jerry Stritzke lauded the noble intentions of the companies boycotting OR, but discussed the necessity of coming together as a community. “I believe it would be a mistake for us not to gather as an industry this July. Now more than ever, we need to act together to advocate and find a common voice to protect our most important asset—our public lands,” wrote Stritzke.

“REI will be at Summer OR,” he continued. “We will also show up at every opportunity to advance the conversation in support of our public lands. We will stand up to politicians who would deprive our children and grandchildren of the legacy of public lands and all the majesty and wonder that they protect. We think it is more important than ever to come together as an outdoor community and make our voice heard.”

Even while the industry’s leading companies took different tacks, the overwhelming majority were in perfect agreement that Herbert’s agenda had to be be actively fought against and stopped. On February 14, the heads of roughly 30 leading outdoor companies—including several of the aforementioned companies in this article—sent a joint letter to Governor Herbert reaffirming their commitment to protecting public lands and fighting policies that undermine this goal.

Now that Utah is officially out of the mix, the question becomes where OR will choose as its next home. Colorado cities such as Denver and Boulder are likely leading candidates, what with the strong outdoor industry presence in the state. Conservation Colorado has already launched a campaign “to bring the Outdoor Retailer show to Denver after the show’s contract with Salt Lake City expires in the summer of 2018,” according to a press release on the organization’s website. In the press release, Conservation Colorado’s Executive Director Pete Maysmith makes a succinct and powerful pitch: “‘There’s no better place than Colorado when it comes to protection and stewardship of our public lands,’” he is quoted as saying. “‘From embracing our newest national monuments, to being the first state to establish a holiday to celebrate our lands, to soundly defeating eight bills in our state legislature that would have turned our lands over to private interests, we fully recognize the myriad benefits that public lands bring to our state and to the nation.’”

For more on how this story has developed, read our early coverage.