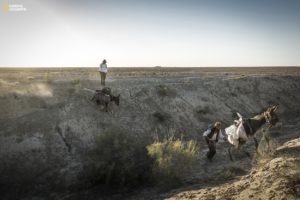 National Geographic Fellow and journalist Paul Salopek has set out on a decade-long mission: a 21,000-mile odyssey to retrace the footsteps of our ancestors' migration.

Two years behind schedule—and contented in that—these are his lessons so far.

Considering the amount of walking he has done over the past four years, it’s shocking how few pairs of hiking boots National Geographic Fellow Paul Salopek has gone through. “I’m on my fifth pair,” he says. “I get about 1,000 miles out of them.” It’s actually more like 1,200 miles per pair, since Salopek has walked over 6,000 miles (10,000 kilometers) to this point.

But he’s nowhere near done. Salopek is in the middle of the biggest project and story thus far in his life as a journalist. Four years ago he set out walking from the cradle of civilization in Africa with the goal of retracing the migration of prehistoric man into the far corners of the Earth; the journey would take seven years, cross 21,000 miles, and would provide a once-in-a-lifetime opportunity to get at stories both ancient and new, local and global, intensely personal and profoundly large in scale. “This is the culmination of a career of doing slow journalism,” Paul told me when we spoke via Skype several weeks ago.

My first question for Paul was whether he is on schedule. “Gosh, nowhere near. I’m way behind,” he says, without a hint of worry in his voice. “This project was originally planned to be seven years on a basic calculation between walking and journalism. I’m probably two years behind schedule because things are just too interesting. There are really interesting stories along the way. We’ve updated the estimate to about a decade now.”

Paul was at that moment in Bishkek, Kyrgyzstan. He’s there for winter, waiting for the weather to change so he can cross over the Tian Shan into Northwestern China. But again, the waiting isn’t troublesome for him; rather, it’s just an opportunity to unearth more stories.

The Out of Eden Walk grew out of insights gained from over 15 years of reporting. Salopek is a Pulitzer Prize-winning journalist who has written about people, places and conflicts the world over. While he reported on his fair share of daily news wherever he found himself, the publications he worked for also gave him the “latitude to go do one-offs—big, six-month stories,” and the like.

As he tells it, he “became kind of the ‘long-projects guy.” He covered events like the Balkan Wars, Iraq and Afghanistan, but also paddled down the Congo River for a month as a vehicle to tell a different, more complex story of globalization and human interconnectedness.

“I had always done long-form stories, using my body to report—going out with forest rangers on patrol in the Congo, for example, or going and collecting rocks in Mexico with people that were collecting pumice,” Paul says. All of these adventures, he notes, were predicated upon the idea that joining people in their work was crucial to real connection and understanding.

How do you get access to a Bedouin’s mind? You work alongside him. You don’t try to schmooze him while standing outside your rental car.

As he traveled and wrote more and more, he started thinking. “What if I got out of the airplanes, helicopters and rent-a-cars? What if I walked between stories instead of flying to them? That was kind of the seminal epiphany,” Paul said. So essentially, the Out of Eden Walk is just taking what he has always done to its logical extreme.

The Walk officially began in January 2013 in a nomad encampment in the rift valley of Ethiopia, which sits atop the oldest human fossil site ever discovered—approximately 156,000 years old. For a project tracing man’s first migration, this was an obvious starting point. “That first ancient journey,” Paul feels, “is probably the most important in human history because it defined us as a species. It socialized us to be capable of collaboration. It changed us and shaped us into who we are. It was the original walk into our becoming human.”

The stories he’s found himself in the middle of have been as colorful and varied as the landscapes he trudges through. Early in his walk, Paul was stuck trying to get a boat from Djibouti to the Arabian Peninsula. No one was willing to take him because getting attacked by Somali pirates was too great a risk at the time. While stories of pirates were often headline news stories in major papers, Paul—by virtue of his slow, methodical journey—made a connection that hadn’t been covered before. Walking out of the Rift Valley to the seashore, he spent weeks with paleoanthropologists. “They were complaining that their dating methods were all messed up because there were no research vessels willing to take core samples to measure the age of the rocks,” he says. “This big data hold in the Indian ocean had paralyzed scientists for years in their quest to recreate the human family tree.

“Anecdotes like this are like gold. When I ran into the pirates, I realized it was the same obstacle that Tim [a paleoanthropologist] was running into 400 kilometers and a month ago in the desert.” Paul ended up writing an article about this, and it had significant impact on the scientists’ work.

Salopek’s mode of travel is what allows him to discover these “oblique and lateral connections” that span both time and geography. And it’s fairly simple why this happens: “When you’re walking, you have to talk to people.”

Paul has friends and family that join him along the way. But he has also gained an entirely new family. “Local folks have become very, very dear. I look back and see one person after another with hands raised on height saying goodbye.” The close relationships he has formed are functions of both the time he spends with certain individuals, but also the environment they are in. “You bond with people at a deeper level in the outdoors,” he says.

In the second half of 2016, Paul walked through the “Stans” of Central Asia along the network of routes that form the ancient Silk Road. Thinking in paragraphs more than sentences, he explains to me thoughts about the “circularity of history” that he sees time and again in his walking. “Why is Central Asia such a backwater in terms of the churn of current events, whereas 1,000 years ago it was a major cultural center in the world with glittering cities, astronomical laboratories, and more?” he asks. He dives into multifaceted explanations such as the area’s colonization by Tsarist Russians; the “closing of the imagination that coincided with incessant warring”; continual violence that brings with it anxiety and fear; “theocratic political structures—conservative Islam, for instance—that shut off all intellectual debate.” And with all of that, he says, suddenly the astronomical laboratories are shuttered and regional innovations like paper and irrigation systems slowed down. He calls it the “closing of a community mind.”

Walking through Central Asia, Paul passed through those once glittering cities turned ghost towns. He found the tourism industry there fascinating. “They live off a Silk Road nostalgia now,” he says. “It’s beautiful, but melancholic too, when you have to turn your head back over your shoulder and ask yourself where your glory years lie.” He says narratives like that remind him of one of his favorite William Faulkner quotes: “The past isn’t dead. It isn’t even past.”

It’s amazing to think that more than four years in, Paul’s project isn’t even half done. He still has to make his way into Siberia and then amble down through all of the Americas. The many miles Salopek has left to cover bring to mind the final lines of another famous American author. Robert Frost’s poem Stopping by Woods on a Snowy Evening ends thus:

In Vladimir Nabokov’s Pale Fire, the narrator Kinbote interprets each of these lines differently: “One personal and physical, and the other metaphysical and universal.” While there are still many miles, many pairs of boots, and many individuals Paul Salopek will meet, there are also many stories to go before he is done.

For some, the scale of the Out of Eden Walk might be overwhelming. But Paul is simply heartened by the people he’s met and stories he’s found. “At boot level,” as he says, the “connections that tie all stories together,” come out. “If you pull the thread on one story, as radically unconnected as it seems, it might pull the other stories as well.”