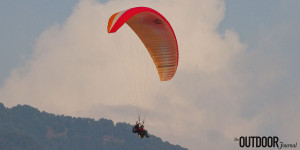 A tandem paragliding crash in the adventure sports spot of Solang Valley near Manali in Himachal Pradesh, North India, claimed the life of a male passenger, and led to serious injuries to the pilot last Wednesday.

The victim was identified as Manish Kumar from Calcutta in West Bengal. The pilot, Dayaram, a freelancer from the state of Uttar Pradesh, is struggling with his injuries in a hospital, sources in the paragliding industry said.

Debu Chowdhary —  India’s former number 1-ranked paragliding pilot— points towards unprofessional standards and practices in the industry that lead to these accidents.

“The details of the incident are still unclear… it appears to have been the pilot’s error,” Mr Chowdhary, a pilot certified by the Switzerland-based Association of Paragliding Pilots and Instructors (APPI), told The Outdoor Journal from Solang.

In the last few years Solang, Manali, Bir-Billing (Himachal) and Kamshet (Maharashtra) have become become the main centres for commercial and cross country paragliding in India. But the sport has also caught on in Goa, Sikkim (North-East), Uttarakhand (North) and Tamil Nadu (South). Industry players say the possibility of alpine, high mountain, flatline flying, normal hill launch, dynamic and cross country styles of paragliding is what makes the sport alluring in India.

Solang Valley, located at an altitude of 8400 ft, has an excellent geographical location for winter and summer sports. In winter, the quality powder snow lures skiers, while in summer about 250 paragliding pilots and numerous tourists take off from the valley’s grassy slopes.

Mr Chowdhary says that the sport of paragliding is inherently as safe here as any other place in the world, but it needs nuts and bolts, like management and regulation, to keep it running smoothly in place.

The Paragliding Association Of India (PAI), formed four years ago by a handful of the sport’s enthusiasts, has been unsuccessfully working towards recognition for the aerial sport in India. As of now the self-styled entity is yet to get Government of India’s recognition as the apex body for the sport in this country. Still it has been holding awareness workshops, competitions and issues pilot ratings on its own merit.

According to the Fédération Aéronautique Internationale (FAI), the principal air sports federation in the world, the apex body for such sports has to be recognised by the civil aviation authority of that country. Also, FAI is the worldwide authority that ranks paragliding pilots / instructors.

Despite the situation of paragliding as a sport in India, Mr. Chowdhury is rather upbeat about its overall safety record saying, “surprisingly, it’s not that bad. It’s as good or bad as any other country when the sport was still new. It will shape up in India.”

Mr. Chowdhury however lamented about the unprofessional standards followed by inexperienced pilots, and expressed worry about the mushrooming number of operators. He felt these have been some of the reasons that Manali / Solang has remained shy of being an international destination for the sport.

Ajay, who did not want to reveal his full name, is a para pilot in Manali with business interests in paragliding. He said a 20-minute tandem flight in Solang Valley can cost up to Rs 2,500 (USD 42) where as the freelance pilots offer it for as less as Rs 800.

“I’d say that the paragliding industry brings in around Rs 2-3 crores (USD 439,000) revenue to the local industry annually. And all this despite no recognition from the Indian government as an adventure sport. This is also what is drawing teenagers from Bihar and Nepal to become pilots after a few years of working with an organised set up. They just set up shop with very poor infrastructure,” he says.

Mr Ajay added that these under-qualified pilots do not have knowledge about thermodynamics of a flying area, leave aside the wind conditions, which render the valley prone to accidents.

And as of now India has only 5 instructors certified by APPI, the international body. These instructors run their own paragliding schools and coaching centres, and also take part in international competitions.

Bhola Thakur, a paragliding pilot with 23-years experience in the region said an official inquiry to the accident by the local authorities will be held soon. He however added that details emerging about the accident pointed towards pilot error.

“The paraglider canopy had collapsed. It appears that the people who crashed were flying too close to the ground. All the details coming out about the incident indicates that some Standard Operating Procedures may have been skipped by the pilot. There were others doing tandem flights too at the same time and there was no weather disturbance,” Mr Thakur says.

Describing the condition of the slopes in the summer, Mr Thakur says the grassy hills are full of gliders, and pilots strapped onto ecstatic looking tourists.

“Suddenly the sky is full of them, sometimes almost clashing in the air due to the thermals. The last few years has seen a major rise in the number of pilots due to rise in demand for the sport,” he says.

Another pilot who operates in Solang Valley described the paragliding operations like a disorganized cartel. “Even an ice-cream vendor could get a bunch of trained people with a few flying hours in their log book. Some have even bought second hand equipment. Zorbing, horse riding, paragliding, people playing cricket… all happening near one another. They should all be in separate areas if this has to be an international venue and paragliding be considered as a serious and safe sport,” he says.

Right since 2004, fatal accidents have dogged the sport and the high court of the state had to step in till safety rules and pilot eligibility criteria were enforced.

This is where PAI general secretary Deepak Tulsani says it has been doing its work. “In the past three years, PAI has ensured quality of pilots emerge out of India by introducing a Paragliding Pilot Proficiency Identification (PPPI), which is a rating”, says Mr Tulsani. However this rating is not officially recognized by the government and therefore, any international body.

The best paragliding pilots are those certified by either the British Hang Gliding and Paragliding Association (BHPA) and the USHPGA of the United States (which is the case with some Indian pilots). But recognition as an instructor either by the  French-run FFVL or Germany’s national paragliding body DHV is also credible enough to fly anywhere in the world.

Mr Tulsani admitted that it was shocking how at the tourist spots people with less experience claim to be paragliding pilots because “it takes a couple of years of intense study and many flying hours in the log book to get a trainers’ certificate.”

Another grey area about paragliding in India has been equipment safety checks. This has been a major issue in all the paragliding spots in the country, says Tulsani, and many operators set up shop without these fundamentals.

“Equipment airworthiness testing will be introduced in India this year. It is a very expensive facility but an essential one to improve and ascertain the safety of the paraglider,” he says.