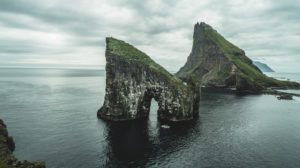 Pearson, Wright and Hirayama Go Chossaneering in the Faroe Islands

Most climbers have a visceral dislike for “choss,” or loose, dangerous and dirty rock.

But British climber James Pearson has such an affinity for it, that he recruited a team of two other world-renowned climbers to make the first ascent of one of the world’s tallest sea cliffs, in the Faroe Islands, and what was sure to be one of the chossiest, sketchiest and most bizarre climbs any of them had ever done.

While many cutting-edge climbing expeditions, like those planned by Mike Libecki, trace their beginnings to high-tech satellite imagery or whispered stories of far off places, others have more modest origin stories.

“Sometimes you hear about a cool new place through the grapevine; sometimes you stumble on to random info from people,” British climber James Pearson explains. “But sometimes, you just go on Google and start searching.” And that’s how he first discovered the untold climbing potential in the Faroe Islands. “I was reading some list of the craziest rock formations, and the Faroe Islands popped up for having one of the biggest sea cliffs in the world,” he says.

And best of all, it had never been climbed.

The Faroe Islands are a part of the Kingdom of Denmark. There are 18 larger islands in the archipelago and heaps of other islets and sea stacks. Over the centuries, the islands developed an agrarian culture unique from mainland Europe. The inhabitants all learn Faroese as their first language growing up. In many ways, it seems a land apart from the the continent it is a part of.

The British troops stationed on the Faroe Islands during World War II called it the “Land of Maybe,” due to the mercurial weather that frequently stalled or delayed plans. The mists and fog that blanket the islands daily make the sea cliffs appear ghostly and phantom-like when they emerge from the clouds.

The largest cliff, Cape Enniberg, plummets 754 meters from its highest point, and that was the one that Pearson wanted to scale. It’s allure for Pearson lay not only in its immensity, but in his own personal penchant for “choss climbing,” as he puts it.

“In the UK trad climbing scene, climbing on crappy, chossy cliffs once or twice a year is just something we do. It’s a fun way to get away, do something different and see beautiful parts of the country. But since moving to France, I’ve done much less of it. The French only climb on the very best rock because they have so much of it.”

Pearson recruited two good friends and fellow The North Face (TNF) sponsored-athletes to join him and Caroline Ciavaldini, his wife and also a TNF athlete. (Ciavaldini had already decided that she wanted no part of Enniberg’s loose blocks, but would participate in the rest of the expedition.)  First up was Yuji Hirayama, the legendary Japanese climber whose resume includes setting the speed record on The Nose with Hans Florine on multiple occasions, and being the first person to onsight an 8c (5.14b). “Yuji was a really obvious choice,” Pearson says. “He’s an incredible climber, but he’s also calm and calculated”―a not-to-be-undervalued quality what with the intrinsic dangers that Enniberg promised.

Next was Cedar Wright, an American choss master and jester in even the most unpleasant of climbing situations. “I figured regardless of what difficulties we might find on the route, if it was dangerous or if it was sketchy or crazy, Cedar would be the guy,” Pearson says.

When they all arrived in the Faroe Islands, they set about recceing Cape Enniberg and espied an obvious direttissima: a central prow splitting two overhanging faces. After unforeseen access issues left their Enniberg assault in limbo for several days, they learned they had gotten the greenlight at 6 pm one night. Their sources indicated a 24-hour weather window, so even though Pearson says they “weren’t sure if it was a great idea,” they geared up, set off sailing for the bottom of the cliff at 8 pm, landed at 9 and started climbing at 10 in the evening.

Racking up at the bottom, Pearson had a moment of doubt: “Some really heavy questions of what we were doing there came into my head. The rock we were going to climb―this kind of basalt―looked like a jenga tower of boulders. I realized how horrendous and dangerous it might be. So I felt awkward putting two close friends in a risky situation like that.”

But Wright and Hirayama were there by their own accord and psyched to get into it. “Them being there kind of pushed me on at the same time,” Pearson says.

Wright drew the first harrowing lead. “Cedar spent an hour climbing up the first kitty-litter pitch with grass tufts every now and again,” Pearson describes. “At one point he was probably 40 meters runout: he definitely would have died if he fell off. He was mantling on these loosely attached grass tufts. We immediately realized it was going to be more serious that we thought.

“When me and Yuji got up to the belay, we all looked at each other like, ‘This is fucked,” Pearson says.

Yuji drew the second pitch, which involved rounding a corner into a gulley of loose blocks. He climbed slowly, shouting descriptions of his progress and the nightmarish rock down to Wright and Pearson. At one point, little pebbles began raining down on Wright’s head, which he and Pearson could only hope didn’t portend larger debris. Finally, Yuji set a belay and brought them up. Pearson says, “Yuji crushed it. There was so much scary stuff on that pitch.”

The next couple hundred meters were more of the same. No less serious, but somewhat quicker, at least. They didn’t encounter any particularly difficult climbing, just lots and lots and lots of choss. “It’s amazing we didn’t injure ourselves,” Pearson says.

The second half of the climb turned into a different kind of adventure altogether. 400 meters of soaking-wet, grass-covered slabs, separated by exfoliating rock bands, lay between the guys and the top. They started simul-climbing but abandoned that strategy when they realized how insecure the slimy basalt bands were.

Just as Pearson had counted on happening in such an unsettling situation, Wright took the sharp end and quested off. Pearson remembers him yelling, “Dude, you won’t believe it. I found a path.”

They had stumbled on what Pearson describes as a “poor man’s via ferrata,” a rickety system of old ropes and pieces of wood that had been hammered into the cliffside.

As unexpected as the path was, it didn’t match their surprise in running into a bunch of sheep. “Every bit of usable land in the Faroe Islands is used,” Pearson explains. “They put sheep anywhere they can, and they save the best, hardest-to-get-to places for these special rams that sell for more. These crazy places on top of the cliffs that no other animals can get to except birds, they end up with these jungle-esque plants that are really good for the rams and make their meat taste really good, apparently. So there were fricking sheep up there!”

For six hours, Pearson, Wright and Hirayama zig-zagged their way up the terraced grassy slabs and rock bands. “We’d go left and right, back-and-forth until we could go up a bit. Like a labyrinth. I’ve never done something so weird,” Pearson says. “You couldn’t really call it climbing, but it was still really hard, super physical and super terrifying.”

At one point on the grassy slabs, Cedar Wright was about ten meters from the belay and mantling onto a ledge. Pearson and Hirayaa could see grass falling off. And then they heard Wright shriek. “But we didn’t see him fall off,” Pearson says. “Then we hear him yell, ‘A bird just puked in my face!’ Me and Yuji started cracking up, meanwhile Cedar is yelling ‘It’s not funny.’

15 hours after leaving the base, they finally reached the summit. Caroline Ciavaldini, filmmaker Will Laschelles, a contact from the local tourist office, and some local Faroese met them at the top. Pearson says, “They were all psyched, gave us hugs, thought we were superheroes. They brought up bottles of gin that we all drank.”

Reflecting on Enniberg a month after the climb, Pearson says, “There’s no part of it that would make for a good regular climbing trip. But I loved every minute of it.”

In the remainder of their time in the Faroe Islands, James, Cedar, Yuji and Caroline each put up a new climb, all in the 5.12 range, on a smaller sea cliff of good-quality stone in an area called Floating Lake. “We hoped that by developing routes we could give local climbers something to aim for and get them towards the more adventurous climbs,” Pearson says.

“The Faroe Islands will never be a destination for everyday climbers from around the world, but there are definitely adventures to be had.”

Feeling inspired? Want to have a climbing adventure of your own? Check out The Outdoor Voyage and book your next trip.

Feature Image: Sea stacks in the Faroe Islands. Pearson, Hirayama, Wright and Ciavaldini split into two teams at the end of the trip, climbed two towers, and set up a Tyrolean traverse between them. Photo: Will Laschelles.