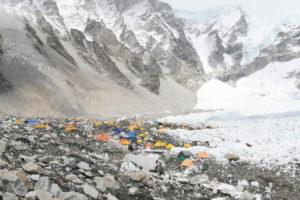 While mountaineers are being airlifted, several are still missing on the world's tallest peak. Uncertainity over Everest climbing season continues on the south side, it is likely being called off on north (China) side.

Indian Army officials based in New Delhi told The Outdoor Journal, “According to the information we have received, the route between Base Camp and Camp 1 on the south side (of Everest) is damaged. Climbers stranded on Camp 2 are coming down to Camp 1, and from there they are being airlifted.”

According to an official at the Embassy of Nepal in New Delhi, “300 people are still missing around the Everest region.”

“This is an overall, approximate number ,” he told The Outdoor Journal Monday afternoon. “It is very difficult to establish a constant connection with Nepal.”

Cellular networks throughout Nepal are jammed. The Indian Army’s media centre sent an update at 4:30pm IST on Monday, according to which “an electrical damage assessment team, along with communication equipment including high-frequency communication sets has been dispatched to Nepal.”

“Approximately 150 bodies have been seen at the epicentre of the earthquake – Barpak village near Lamjung in Gorkha district. A medical team has been dispatched and road to Kathmandu has opened up,” the update said.

The Nepalese army and private agencies make use of Eurocopters, designed to fly at very high altitudes. According to tweets by mountaineers in the region, some climbers have been rescued, while some await.

Around 15 climbers still to be heli evacuated tomorow,weather permitting,from camp 1. Everybody else down to base camp.Huge credit 4 pilots.

Dr. Nima Namgyal Sherpa, who runs Himalayan Medics on Everest Base Camp and is  fondly known as the Everest doctor also posted pictures of helicopter rescue at EBC.

Major Ritesh Goel of the Indian Army has been commended for his efforts as the army doctor in the region.

While it is still unclear if the Everest climbing season has been called off on the south side, The Outdoor Journal received a report Monday night from an Indian expedition on Everest via north side that all Everest expeditions via north side are likely to be called off.

The shallow M 7.8 Nepal earthquake occurred as a result of sudden movement and inherent release of seismic energy along a rupture plane between two tectonic plates – the underlying Indian and overlying Eurasian plate. The former one converges with the latter one at a rate of 45 mm/yr towards north and hence drives the uplift of the Himalaya. The US geological survey expects 3 to 14 aftershocks with a magnitude greater than 5 with a 54% chance of a another potentially devastating M>6 event. Despite being tectonically very active, M>6 earthquakes are rare in the Nepalese Himalaya: The largest recorded earthquake in Nepal – the M 8.0 Nepal-Bihar earthquake — happened over 80 years ago. Nevertheless, Nepal is significantly more earthquake-prone than other regions in and around the Himalaya such as the Tibetan Plateau. This also applies to earthquake-induced hazards such as landslides or mudflows.

“This morning, team leaders of international expeditions had a meeting with the Chinese Mountaineering Association (CMA) officials. In the next 10-15 days, earthquake or tremors are expected to be repeated,” said the report by Transcend Adventures, an adventure tour operator headquartered in Hyderabad.

It continued with “Transcend Adventures Team Leader Mr. Shekhar Babu Bachinepally said our team had reached an altitude of 6400mt / 22000 ft where there was not that much of a damage. But above that height, there was a lot of damage to the route and the mountain itself. Hence, safety is at profound risk. Added to that was heavy snowfall in the last 48 hrs due to which there is a lot of powdered snow covered along the route which will affect the decision of the climbers and Sherpas.”

“The Sherpas who are the lifeline of all the expeditions are also broken morally as lot of their friends and close families have been affected back at Kathmandu.The decision will be dependent on the Sherpas and CMA (Chinese Mountaineering Association) officials who will contact their counterparts in the Govt. of China and decide about the destiny of this expedition,” it concluded.

Alan Alarnette, a well-known Everest blogger who was climbing Lhotse this season said on his blog that the population of Everest Base Camp including both north and south side was approx 1000 this season. The climbers included new expeditions and expeditions that were cancelled last year, post an avalanche disaster on Khumbu Icefall.

According to his blog, the Icefall doctors have stopped working on the Icefall route due to safety and aftershock concerns. Whether they return or not is still uncertain.

Meanwhile, The Outdoor Journal received a response from expedition leaders Samir Patham and Sauraj Jhingan of Adventure Pulse, a Pune-based adventure tour operator on Everest expedition via south side this season. They got in touch from Everest Base Camp Monday evening.

TOJ: What is your current location?
Samir & Sauraj: We are at Everest base camp. Our tents are located at the mouth of the Khumbu Icefall.

TOJ: Where were you when the earthquake and subsequent avalanche took place?
Samir & Sauraj: We were at Everest base camp, having returned from high camp on Mount Pumori as part of our acclimatisation schedule only the previous day.

TOJ: Can you describe what was happening around you at the time?
Samir & Sauraj: It was a regular day on the glacier. We were a little disappointed to see that the weather had taken a turn for the worse, having spent close to four weeks in very snowy conditions and had only enjoyed a few clear days that week during which we made our way through the Khumbhu icefall up to Camp 1 as per plan. We had climbed up to Pumori high camp the previous day and were resting at Base Camp intending to resume our rotations on Everest.

We were sitting in our dining tent when we felt the earthquake. The tremors were followed almost immediately by the sound of avalanches so we stepped out quickly to try and spot the source and see which mountain it was coming down. Our immediate concern was the infamous LoLa glacier face so we were busy scouting the slopes of the Lohtse and Nupse faces, not realising that the danger was speeding down the slopes of Pumori behind us. It took us a few moments to orient ourselves and locate the source of the avalanche by which time of course the avalanche was almost upon us! We immediately ducked back into our tents – I jumped into the dining tent and Sauraj went into the kitchen tent (which were the closest to us). We didn’t have time to think or react and we had barely made it into the tents when the avalanche hit us. It hit our campsite and tore through the kitchen tent and since we could not close the flap in time, flowed through it ripping the canvas open from the top and then proceeded to level our entire camp. It all happened so quickly. Before we knew it, our tents were flattened completely and covered in about 6-8 inches of snow! Despite that however we stayed protected in the relative shelter of our camps our entire team escaped with only minor injuries.

We got out of our tents once we were sure that the danger had passed to take stock of our team and the damages and were shocked to see that all the tents that were 150 m below us (closer to Pumpori) had been entirely destroyed. The icefall was scattered with equipment and the skeletal structures of various tents. We spared a minute to thank God and the various powers that be for keeping us safe and then began to attempt to recover our supplies and equipment and offer whatever assistance we could to the other camps.

TOJ: What are the relief and first aid facilities available at your campsite?
Samir & Sauraj: Himalayan Rescue Association has a fully equipped medical station that it sets up at base camp for the climbing season every year. Unfortunately since they were closer to Pumori, their camp too got caught in the avalanche and they sustained heavy material losses. The Indian Army team also had a medical tent set up as well and, in true army style immediately went to the task of assisting the injured and locating missing climbers from the various other contingents. Two other well established companies, International Mountain Guides and Asian Trekking had set up their camps close to the entrance of base camp and were spared the worst of the avalanche so they converted their dining tents into makeshift medical camps as well.

TOJ: Where are you now and what are the future steps you are planning to take?
Samir & Sauraj:We are still at Everest Base Camp and have chosen to stay and help with the rescue efforts for the climbers and support teams here. We were able to recover 75% of our equipment and material and all our food rations as well. The avalanche destroyed a lot of the other camps and many climbers and Sherpas lost their tents, sleeping bags, rations and equipment and since we are running our own expedition and have the experience and ability to help, we feel that we need to be here to provide whatever assistance we can in the aftermath of this tragedy. Therefore our plan is to hold strong and provide logistic support for those stranded here until they are able to recover and sustain themselves.

TOJ: Is there anything else you would like to tell us?
Samir & Sauraj: This is a difficult time for everyone and while avalanches are not uncommon in the khumbu, earthquakes of this magnitude are quite rare. This particular one set off multiple avalanches in the area and in addition to the one down pumori that hit base camp, it also triggered avalanches down the Lhotse and nupse faces of the mountain. On Everest, the quake caused hanging glaciers to fracture and release. The most significant of these fell from a hanging glacier on the northern shoulder of 23,494-foot Pumori, a prominent peak on the west side of Everest whose flanks form the basin where Base Camp sits. (If you’re in Base Camp looking at Everest, it is directly behind you.) Typically, Base Camp is insulated from avalanches by distance—camps are set back several hundred yards from any avalanche path—and by a series of sand-trap-like moraine lakes and hillocks that cut short any falling debris. This however was once-in-a-hundred year event.