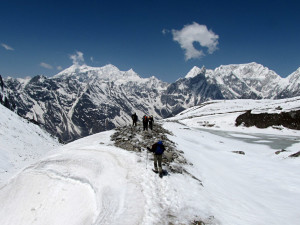 Sources say two trekkers have died in Manaslu (west of epicentre) with several stranded, while more than 100 are still missing in the Langtang valley (east of epicentre) of Nepal.

Nearly a week after a major earthquake shook Nepal, the Trekking Agencies’ Association of Nepal (TAAN), an umbrella body of trekking agencies of the Himalayan nation said that two trekkers from Germany have died in Manaslu region.

Manaslu (8,136m) is the eight highest peak in the world in the west-central part of Nepal, in Lamjung district. The region is popular for its trekking routes, especially the 177km circuit trek that skirts around the Manaslu massif over the pass down to Annapurna.

Ramesh Dhamalia, president of TAAN told The Outdoor Journal over telephone, “Two German trekkers have died in Manaslu, and approximately 50 foreign trekkers and 100 porters and guides are stuck in the region, awaiting rescue. No one is reportedly missing in the region so far.”

“There are more than 100 trekkers still missing in the Langtang valley,” he added

Langtang valley is a remote mountainous region 60km north of Kathmandu, was reportedly severely affected by the earthquake. The region is also popular among trekkers during this time.

When asked about Annapurna, also west of epicentre, Dhamalia said no one was reported missing or stranded in the region, although news reports from four days ago say two Tasmanian girls have been missing in the region ever since the earthquake.

According to him, heli rescue operations aided by the Nepal Army, TAAN, Tourism Ministry and private agencies are already underway.

The 7.9-magnitude earthquake has killed over 6000 people so far, and 19 people died on Everest in the earthquake-triggered avalanche.