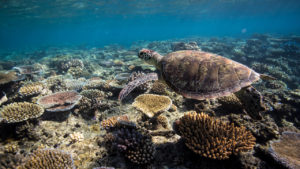 Many commentators from around the world have been praising 'visionary' steps taken by Belize to ensure that the Belize Barrier Reef, the world's second-largest after Australia's, is no longer considered a 'World Heritage Site in Danger' by UNESCO.

According to a UNESCO report on June 26th, 2018, Belize has taken specific, important steps to ensure that the world’s second largest barrier reef system will be protected from oil exploration and other human activities.

As always, The Outdoor Journal contacted industry experts who know the oceans and coral better than anyone, to get their inside opinion. “Belize has changed for the better in recent years. Recently, we were able to convince them to pull the flag and registration of a notorious pirate fish factory vessel, presently under arrest in Peru. I am encouraged that there is an effort to protect the unique and beautiful Belize Barrier Reef.”

“Back in 1998, I had to navigate through a passage on that reef in the midst of a storm, so I am quite familiar with how fragile this reef eco-system is. I trust that UNESCO is confident that Belize is seriously active in their protection efforts.” “It’s certainly uplifting to read that a reef is recovering, but that doesn’t mean there is not a long way to go. Something categorised as endangered means it’s very close to disappearing, and being removed from that category only means we can barely start doing something about it long term in order to really protect it.”

“Coral reefs everywhere in the world are being affected by many threats such as bleaching, acidification, plastic pollution, invasive species (such as the lionfish in Belize and throughout the Meso American barrier reef), and overload of scuba divers, especially in the most popular reefs. We need to take big steps fixing all of this before it’s too late, and ‘too late’ is long before it’s considered endangered. A great example of this is Cabo Pulmo, one of the oldest coral reefs in the world and the most northern one in America. It’s a small but special place. What Sylvia Earle would call a hope spot. It was the local community that 20 years ago realised they were affecting the very same reef that provided them with a way of making a living through fishing. Before it was too late, the pushed for strict protection laws, turned it into a National Park, and switched over to sustainable eco-tourism activities such as snorkeling and scuba diving, but in the most responsible way possible through training, certifications, and strict diving schedules that take the heavy impact of divers off the dive spots. In those 20 years, biomass increased by almost 500% and the small reef has flourished and returned to what we think it looked like thousands of years ago.

Another good example is the Revillagigedo Archipelago, also in Mexico, that was recently turned into the largest marine park of America, covering 148,000km2 and it was done while it still is a pristine, almost untouched environment. The challenge there is to implement surveillance and law enforcement against illegal fishing in such a big and remote area.

If we protect these Hope Spots, and do it right, life will flourish around them and the ocean will start to slowly recover.” “It is exciting news. It is so important for our oceans to safeguard critical habitats like these. More than ever, countries are starting to step up and offer comprehensive support to important ocean ecosystems, moving away from ineffective ‘paper parks’ and usingscience-basedd management strategies, to secure effective and lasting protection for these sensitive marine environments. I applaud Belize for their efforts and commend their approach to saving this important heritage site.”
“I have not dived in this location myself but scientists at MMF have collaborated on research in the region on whale sharks, and I am glad that when I visit one day, I might find a flourishing well managed park.”
You can follow Dr. Andrea Marshall on Facebook, Twitter and Instagram.