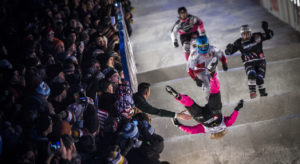 Red Bull Crashed Ice Exists and You Should Know About It

Yes, this is a real sport—and yes, it’s kind of insane.

The Ice Cross Downhill World Championship is in Ottawa, Canada this weekend (March 3rd-4th) and it will be the tightest season climax to date. This is how the fastest sport on skates has evolved—especially for the women.

To sum it up in one long-winded sentence, Red Bull Crashed Ice takes some of the best and toughest skaters in the world, pins them up against each other (literally shoulder to shoulder), sends them skating down a massive ice track with high drops and sharp turns, and then crowns the one that gets to the bottom first.

[youtube https://www.youtube.com/watch?v=Yec4SpSM2JU]
On top of that, The Red Bull Crashed Ice events have only gotten progressively bigger and more competitive.

Red Bull Crashed Ice legend and 2012 World Champion, Kyle Croxall told The Outdoor Journal that “the sport has really grown in the past couple of years. The tracks used to be a lot longer. Now they’re shorter, faster and more technical.”

Though the sport has been officially around since the first ever race in 2001 in Stockholm, Sweden (set-up in a fish market), it has only been the last 7 years where a point system was introduced and the sport entered into the ‘world championship era’.

Even the gear has evolved substantially with the athletes in a short amount of time. Speaking with three-time competitor Paul Tremblay, “when I competed, we were showing up in hockey helmets, now everyone’s wearing legit gear. They look like motocross racers. The most successful guys are border-cross, ski-cross guys. They’re coming from sports that are relatable and are training in the off-season.”

Croxall said that was a big part of why he feels so good this year. “My skating was good, but the wide range of technical things I worked on in the off-season are much better.” A lot of the technical training his younger brother, Scott Croxall—who is also racing and is in the running for the men’s championship title—have been doing for the past few years.

This year, both the men’s and women’s title races are expected to make this the most exciting World Championship the sport has seen. A 4-way point battle between American Cameron Naasz, his compatriot Maxwell Dunne, Canada’s Scott Croxall and Austria’s Marco Dallago makes it anyone’s game.

And the stakes are just as high for the women’s races. Going in with a chance to come out on top are American Amanda Trunzo and Canada’s Jacqueline Legère and Myriam Trepanier.

Getting hooked on the sport since she first discovered and competed in 2014, Myriam Trepanier has watched the women’s races get “deeper every year.”

“This is only the second season where the women are invited to participate in all four races. You can tell we have gained a lot of experience and new talent emerges from the popularity that the sport is gaining.”

Between their fierce off-season training and having being added to the world tour, the gap once seen between the men’s and women’s races is barely visible—not even the length of hair will help distinguish.

Attempting to get more skaters involved, both men and female, the Riders Cup was initiated in 2015. These events are spread across the world and are open to anyone—top athletes looking to score a few extra world championship points and newbies alike.

“Every year I competed there were over 100,000 people downtown—and it wasn’t just popular in Quebéc City.” says Tremblay.

It’s no wonder the hosting city of Ottawa pushed hard for the event to make its way to the capital during their year long celebration of Canada’s 150th birthday—on top of their official opening of the world’s longest trail.

[youtube https://www.youtube.com/watch?v=0CNcN23Tt0M]
It seems obvious from the videos above that there’s no shortage of adrenaline for the racers, but Trepanier says “it’s multiplied by the whole ambience and the energy of the crowd. That’s what makes the experience really unique.”

“The growth of ice cross downhill has been exponential in the last few years, and I don’t think it’s about to stop.”

Oh, The Outdoor Journal may have also heard that Red Bull Crashed Ice is now less of a party weekend than previous years. Not that we’ve ever heard of athletes that party…

Red Bull Crashed Ice Ottawa will broadcast LIVE on their website and Red Bull TV on March 4th at 8.30 PM EST (1:30 AM GMT).