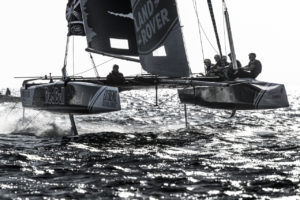 Red Bull Sailing Team caused one of the biggest upsets of the 2016 Extreme Sailing Series Sunday as they knocked overall leaders Oman Air off the Act 7 podium in a thrilling finale in Lisbon.

The experienced Austrian crew, competing in the Extreme Sailing Series for the seventh season, snatched third place from their Omani-flagged rivals in the very last of 23 high-octane races on the waters of Portugal’s capital.

Red Bull Sailing Team, led by double Olympic gold medallist Roman Hagara, were constantly snapping at the heels of Oman Air throughout the four-day regatta and went into the final double points-scoring race just three points shy of the podium.

They managed to pull off the 11th hour comeback in style, winning the race by a comfortable 15 seconds. Meanwhile Oman Air were forced to the back of the fleet by Swiss team Alinghi, crossing the finish line in an uncharacteristic eighth place.

The shock result saw Red Bull Sailing Team leapfrog Oman Air and relegate Morgan Larson’s crew to fourth, the first time they have missed the podium in seven Acts this season. With just two points now separating Oman Air from Alinghi in the 2016 overall standings and Red Bull Sailing Team just four points further back, the final Act of the season in Sydney becomes a winner-takes-all situation for the top three teams.

“We knew going into the last race it was really tight between us and Oman Air but also that Alinghi would be going after them,” Hagara said. “We got the best start we’d had all event and we just went from there. It was a perfect race for us.”

Although disappointed, Oman Air skipper Larson vowed his crew would come back stronger when the 2016 Extreme Sailing Series showdown takes place in December. “Lisbon was a great venue, a great event and you have to hand it to Alinghi, they’ve been on fire and demonstrated they’re the best team in these boats right now,” Larson said. “We’ve got a lot of work to do to catch up but we’re going to bounce back from this.”

Act 7 was won by in-form Alinghi, who scoop their third victory on the trot. Wildcard French team NORAUTO, helmed by Kiwi match racer Adam Minoprio, finished a comfortable second. Alinghi helmsman Arnaud Psarofaghis said his crew would go to Sydney riding a wave of confidence that could see them snatch the overall Series title from Oman Air’s grasp.

“We made a few more mistakes today than yesterday but our performance was still really solid and the crew did a fantastic job, so I’m really happy with another Act win,” he said. “We knew we had to block Oman Air in the last race; we went after Morgan pretty hard and were able to slow them down at the start. I think we can win in Sydney; we just need to beat Oman Air now. It will be all-or-nothing in Sydney and we’re really going to push for the win. Now we’re going to rest for a few weeks and come back stronger than ever.”

Crowds flocked to Lisbon’s Doca Pedrouços as the city, hosting the Extreme Sailing Series for the first time, dished out some of the most exhilarating racing seen so far this year, with the iconic Belem Tower and 25th of April Bridge providing a stunning backdrop. A wet and wild penultimate day saw the fleet hit speeds of more than 35 knots as they tried to contain their super-quick foiling GC32 catamarans.

The drama continued on the final day with a collision between Thalassa Magenta Racing, the first ever all-woman crew to compete in the Extreme Sailing Series, and SAP Extreme Sailing Team, forcing the Danish crew to haul their boat out and carry out repairs that saw them miss four of the day’s six races. Meanwhile Thalassa Magenta Racing, skippered by Kiwi Olympian Sharon Ferris-Choat, finished ninth but proved their potential with two podium finishes during the regatta.

Sail Portugal – Visit Madeira pulled off an incredible overnight repair job to get their GC32 back on the water for the final day after it suffered damage in a collision with wildcard USA crew Vega Racing. The home team finished Act 7 in eighth place behind Land Rover BAR Academy in sixth and Vega Racing in seventh.

The eighth and final Act of the Extreme Sailing Series takes place in Sydney from December 8-11.