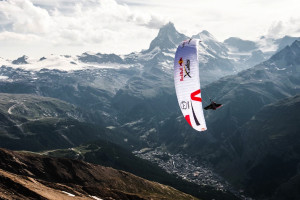 They climbed the equivalent of Everest four times, battled headwinds and a heat wave and hiked and flew 2,000km to cross the Alps.

Making the landing float in Monaco bay is a special moment for any athlete who manages to make goal in the Red Bull X-Alps. But for one competitor in 2015, it was particularly special – Honza Rejmanek (USA1). In eight years of taking part in the race, he had never once completed the epic journey in full, despite coming third in 2009.

On arrival at the last Turnpoint of Peille, looking close to exhaustion having hiked through the night, an emotional Rejmanek said: “It’s awesome. It’s surreal. It’s amazing to be here finally. This is more important to me than the podium. Here we finally get to finish the race.”

It was 11 days and 17 hours since he’d set off from Mozartplatz, Salzburg on what would become an extraordinary journey for him – and the 31 other athletes from 18 countries also taking part. They battled through rain, fierce headwinds, turbulent conditions and baking hot temperatures – and for the athlete Dave Turner, a swarm of attacking bees.

The 2015 Red Bull X-Alps was not the fastest on record – that was 2013 when Maurer reached goal in 6d 23h 40m – but more athletes made Monaco than in any previous race, and it was almost certainly the most exciting.

For the first time in many years, there was a real battle for podium. Time and again Maurer tried to pull ahead only to have challengers like Paul Guschlbauer (AUT1) and Sebastian Huber (GER3) reel him back in. Even as far as Annecy it looked as though Guschlbauer could challenge Maurer for the lead, something unthinkable in previous years.

In fact, on the first day Maurer made a rare mistake on the way to the Dachstein, Turnpoint 2, and was overtaken by much of the race field. Although he recovered quickly, it was clear that Maurer could not afford to make mistakes in this race, unlike in previous years. In 2011 for example, he won the race with a two-day margin, despite serving a 24h time penalty.

“Chrigel Maurer (SUI1) previously won three times in a row, and each time he won by a big margin – setting up a clear lead between him and the others,” said Race Director Christoph Weber. “This time, he couldn’t do that.”

Weber believes Huber is the real star of this year’s race. Huber came 2nd overall and won the Mazda Rookie Trophy, as the highest ranked athlete competing for the first time. Weber added: “He’s so young, and yet he flies so well. He was always a runner, so we know that part is strong. I daren’t even think what he will be capable of in two years.”

In many ways the story of the 2015 edition, is the story of all the other athletes who took part and their professionalism, endurance fitness and flying prowess.

Adventurer Nick Neynens (NZL) for example fought his way back from last place and the risk of elimination to the top ten with an heroic ‘tiger line’ flight across the Swiss mountains, busting through a col at almost 4,000m to cover 170km in the air.

“People talk about home advantage,” he said, “but coming from elsewhere means that you see the adventure with fresh eyes.”

Gavin McClurg (USA2), made history by becoming the first American to reach Monaco, proving that talented non-Europeans were no longer at a disadvantage. He made his presence known right at the beginning during the Powertraveller Prologue by coming third.

“Having never competed I didn’t know how I would compare to the other athletes, so to know I could go head to head with the best was a huge boost.”

During the main race he was with the front-runners until Turnpoint 3, fell back to 20th place and then made an incredible comeback to the top 10 on Day 8. He finished the race by hiking the last 100km through the night to finish eighth overall.

“The last 100km were brutal, my feet were in so much pain, but the race was amazing. It was so much fun,” he said.

2015 was also the year that saw women take part in the Red Bull X-Alps for the first time in a decade. Yvonne Dathe (GER2) was eliminated early after a tactical error not to pull a Led Lenser Night Pass. It allows athletes to break the mandatory rest period from 22:30 until 05:00, during which athletes are normally not permitted to move.

But Dawn Westrum (USA3) excelled, surpassing her own and others’ expectations in reaching the Matterhorn, Turnpoint 7. During one two-day period, she hiked 115km to stay in the game.

“She’s proved that she can hike hard, make intelligent decisions in the air and that women are really strong in this race,” added race director Christoph Weber.

Westrum was elated with her performance. On the last day she flew high above the Aletsch glacier, the longest in Europe, and one of the most stunning areas of the Alps. “It was so beautiful and I just hung out there, cruising along. It was the perfect ending to a great race.”

The Red Bull X-Alps takes a punishing toll on the body. Sleep deprivation, blisters from hiking and sun-burn are some of the more manageable hazards athletes had to deal with. Two athletes sadly had to retire from the race with more serious injuries. Tom de Dorlodot (BEL) injured his ankle after a launch went wrong while fan favorite Toma Coconea (ROU) broke his arm badly after a gust of wind dragged him off his feet after a landing.

Says Race Mastermind Hannes Arch: “I have the biggest respect for the athletes’ ability to act responsibly in extreme conditions. What they achieved is incredible. Despite the fast times, conditions were really tough this year. It shows just how professional the athletes are.”

Rejmanek helps explain the psychological state athletes get into during the race. It’s a state of ‘hyper focus’, he says.

“By days seven to nine you’re in quite a primal state; swopping between euphoria and frustration in equal measure. It’s the perfect game,” he adds. “You can’t brute force your way through. You have to think your way through.”

But the appeal he says is huge. “In some ways it’s the ultimate vacation, albeit a masochistic one, away from life’s distractions, where you just have two things to focus on – hiking and flying. You’re also flying through the most spectacular mountains!”

The end of the race was characterized by a gripping fight for third place between Guschlbauer, Gaspard Petiot (FRA4), Antoine Girard (FRA2) and Aaron Durogati (ITA). Guschlbauer had earlier made a bad route decision south of Annecy in a last bid effort to catch Maurer. He was caught by strong winds that made flying impossible. His fans and supporters then watched Red Bull Mobile Live Tracking in horror and frustration as he was overtaken first by Huber and then Durogati, Petiot and Girard drew level.

Herculean efforts from all saw them arrive literally within minutes of each other. Guschlbauer landed above the Turnpoint, his glider snagging in bushes. Stuffing it into his bag with the help of fans he ran down the hill to Peille to take third – with just half an hour to spare.

The excitement didn’t stop there. Just as Petiot arrived, exhausted after hiking the last kilometers, Girard literally swooped in overhead, arriving just minutes ahead of him. Durogati eventually hiked in an hour later for sixth place.

The race officially ended at midday July 17. Of the 32 athletes who started, a record 19 made goal, three were left in the race, five were eliminated and five withdrew. Maurer’s winning time was 8d 4h 37m.

For Rejmanek, on his fifth Red Bull X-Alps, his time or ranking was not the important point but making the magical waters off the Mediterranean sea after crossing the Alps from Salzburg to Monaco. “It was really powerful to wrap this chapter and say: Mission accomplished!”