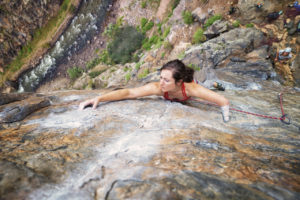 The Reel Rock Film Tour is a major event in climbing each year. It is more than just a movie: it is both a barometer to gauge the general feelings of the climbing community and a yardstick by which to measure the progress (in more than just grades) that has been made.

Here are our thoughts on the four mini-features that comprise Reel Rock 12.

Sharma is the quintessential climber for a whole generation who grew up with his amazing first ascents of sport routes like Biographie and Dreamcatcher. Compared to the gangly Adam Ondra’s and Dave Graham’s of the climbing world, Sharma was muscled, his climbing as dynamic as could be.

It’s been a few years since Sharma graced the Reel Rock screen with his own mini-feature. In Reel Rock 7, he and Ondra faced off in “La Dura Dura,” a chronicle of their attempts to establish the first 9b+ (5.15c); and then in Reel Rock 8 there was “La Dura Complete,” a cut of both of their eventual sends. The story from these two shorts signaled a passing of the torch: Ondra’s rise has since continued unabated, while Sharma has seemed content to focus on personal projects like opening a climbing gym and settled into his role as a representative of the new old-guard. He still makes headlines and graces covers and cranks out impressive first ascents, but his role has changed.

So when Reel Rock 12 opens with “Above the Sea,” a feature about Chris Sharma’s years deep water soloing on the coastlines of Mallorca and climbs he’s established there, it’s straight out of yesteryear.  The absurd number of psats that issue from his mouth, the needless feet-cuts and campus moves tens of feet above the crashing waves evoke a warm nostalgia. You can’t help but smile.

The cinematography and shots are stunning. The story is innocuous and nice: Sharma has settled down and has a family now, but is still driven to explore the cliffs above the thunderous ocean. It is a delight to watch, through and through.

Yet the story is tired. Has little enough happened in climbing in the past five years that Sharma is still the biggest draw around just because of his pseudo-bodybuilder physique and golden locks? This is nothing against Chris Sharma; rather it’s a question about the climbing community.

And to answer that question for us, Reel Rock 12 film turns up the volume, the stakes and and awesomeness full-tilt with the second mini-feature.

The narrative move here is perfect: we transition from Chris Sharma to the first woman to climb his standard-setting route, Biographie, and even get some interview footage with him. Just as La Dura Dura represented Ondra taking over center stage from Sharma, “Break on Through” does the same for women. In this Reel Rock, Chris Sharma is merely prelude. (Reel Rock has had features about women before, notably the excellent Spice Girl about British crusher Hazel Findlay, but “Break on Through” feels different.)

“Break on Through” profiles American climber Margo Hayes and her quest to become the first woman to climb 9a+ (5.15a). Hayes is portrayed as having a laser-focus, but also as a kook who will have fun no matter how serious the objective. In between tries on several of the hardest climbs in the world, she makes goofy faces at the camera.

First up is Hayes’ battle with La Rambla (9a+), in Siurana, Spain. The line is one of the most storied in hard sport-climbing, with ascents by Ramon Julian Puigblanque, Sharma, Adam Ondra, Alex Megos, and roughly a dozen other crushers.

The best moment in “Break on Through” (and in our opinion the best in all of Reel Rock 12), happens when Hayes is working La Rambla. In interview voiceovers as she climbs, American climbers Matty Hong and Jon Cardwell talk about how flexible Hayes is and how she is capable of doing moves and sequences that they would probably never even consider. Next we see Hayes with an improbably high foot, virtually next to her head, before cutting to a gaggle of onlooking male climbers, mouths agape, in awe. The comedy is self-deprecating on behalf of the men behind the camera and on screen, but their reverence for Hayes’ skill is dead-serious and mirrors that of the audience; Hayes is absolutely mind-blowing to watch on the rock.

The film later follows her attempts on Chris Sharma’s Biographie (9a+), in Céüse, France. We won’t give anything else away except to say that “Break on Through” ends with  descriptions splashed across the screen of other massive barriers shattered by women in climbing this year. The audience howled with approval.

“Safety Third” is wildly entertaining and offers the biggest laughs of all four films in Reel Rock 12. Directed by Cedar Wright, “Safety Third” follows Brad Gobright, an American climber dubbed “the next great free soloist” by Outside. Gobright is not what you would expect out of a preeminent free soloist: no rippling Sharma muscles, no Dean Potter platitudes about the beauty and art of ropeless climbing. The short-in-stature Gobright is decidedly ridiculous. In one scene, he shows up to try one of Eldorado Canyon’s hardest and boldest traditional lines (with a rope), but realizes he forgot his shorts. So he climbs it in his skivvies. At another point, the nails-hard climbing above him is the furthest thing from his mind; instead he is preoccupied with where he left his glazed croissant that morning.

Of course, these moments are all played up for comedic effect. In between laughs, are sequences of super-uncomfortable-to-watch and simultaneously brilliant free soloing. The feature builds up to Gobright’s solo of Hairstyles and Attitudes, an insecure pitch of face climbing high up on the north face of the Bastille, a tower in Eldorado Canyon.

2017 was a big year for free soloists. While we love watching Gobright “wow”on the big screen, we hope he tones it down a bit and bumps safety up to second, at least sometimes.

Beck wants to climb 5.12. As she says, she doesn’t want to be seen as a good one-armed climber; she wants to be seen as just a good climber. Full stop. From the description on the Reel Rock website: Beck “is not here to be your inspiration. ‘People say, ‘Look, a one-armed climber, now I have no excuses.’ I’m like, dude, you never had any excuses in the first place.’”

The candor is refreshing and Beck’s journey towards 5.12 is familiar to anyone who has aspired to the grade. Failure, failure, failure. And then bits of progress. Glimmers of possibility.

Beck is a perfect character with which to end Reel Rock 12. Her stoke, determination, ability and goofiness remind us of the best qualities of all the prior segments, and bring them together in one short feature.

Check out the trailer below and read on for more details about how to win free tickets to a Reel Rock showing near you!

LOVE THE OUTDOORS? LOVE GOOD CINEMA? WE’RE GIVING YOU AND A FRIEND THE CHANCE TO GET FREE TICKETS!*