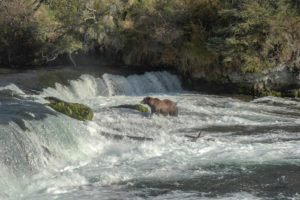 The Senate and House have both voted to repeal “predator control” hunting restrictions in Alaska enacted during President Obama’s tenure.

Supporters of the to-be-repealed legislation argue that the banned practices, which include aerial hunting, protect against the potential slaughter of wolves and bears.

The Alaska hunting season is right around the corner, and federal regulations voted upon last week have spurred new debate over environmental and ethical hunting practices.

H.J.Resolution 69 was approved by the Senate last Tuesday, March 21, and repeals measures put in place under the Obama Administration that placed restrictions on “predator control” hunting practices in Alaska, such as aerial hunting. That rule, known as “Non-Subsistence Take of Wildlife, and Public Participation and Closure Procedures, on National Wildlife Refuges in Alaska,” has been in effect since September 6, 2016. (While H.J. Resolution 69 has now been approved in both the Senate and the House, it will not go into effect until President Trump signs the bill.)

According to NPR, the repealed law “included a ban on the aerial hunting, live trapping or baiting of predators such as bears and wolves—as well as on killing those predators while near their dens or their cubs.”

Lawmakers who voted to repeal the restrictions argued that the original bill infringed on Alaska’s ability to regulate policies on wildlife refuge lands within its borders.

According to the House Republican Policy Committee’s website, Alaskan Congressman Don Young, sponsor of H.J. Resolution 69, said, “There’s no question, the Fish and Wildlife Service rule—which lays claim to more than 20 percent of our state—violates ANILCA (Alaska National Interest Land Conservation Act) and the Alaska Statehood Compact. Not only does this action undermine Alaska’s ability to manage fish and wildlife upon refuge lands, it fundamentally destroys a cooperative relationship between Alaska and the federal government.”

On the other side of the debate are those who argue that the original bill rightly outlawed unethical and unnecessarily cruel hunting practices in the state. In an article at Alaska Dispatch News, author Erica Martinson writes, “The contested rule has evoked vivid imagery by its opponents in Congress: slaughtered wolf puppies, shooting wolves from planes, undercutting the natural order in Alaska’s 76 million acres of wildlife refuges.”

A press release issued by the Center for Biological Diversity echoes these concerns, noting that the repeal of the Obama-era bill will “allow the unsportsmanlike killing of wolves and their pups in their dens and gunning down of bears at bait stations.”

While President Trump is expected to sign the bill into law, continued vociferous opposition from environmental groups and organizations is a near certainty.