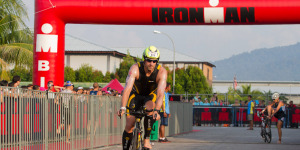 The Ironman triathlon, aka one of the most grueling one-day sporting events in the world, took place in Langkawi Malaysia on September 27th, 2014. Dating back to 1977, the Ironman triathlons take place all over the world and this year, it was aesthetically located within a cluster of tropical islands in a quaint beach town.

The largest international triathlon hosted by Malaysia and the island of Langkawi, TOJ editors Madhuri Chowdhury and Himraj Soin checked it out to see what all the fuss was about. Covering the race from start to finish was nothing short of overwhelmingly humbling, but also a bit of a herculean task, inspiring the young journalists to perhaps compete (in the distant future) in what they thought to be a self-destructive, masochistic, and inexplicably impressive race.

The days leading up to Ironman Malaysia included practice swims, briefings, transition tours, and a whole lot of merchandise shopping. The town was painted with colorfully decked out athletes biking, running, swimming, and eating what seemed to be all the carbohydrates ever produced in the little island. With an amalgamated atmosphere of gaiety, apprehension, nerves, and pure adrenaline-induced excitement, not to mention intervals of rain showers and strong sunshine, the weekend was off to a promising start. The Ironman race, we found, wasn’t just an event, it was a lifestyle, and those who choose to be a part of it seldom turned back. With a cult following of professional and amateur athletes, with many months and years of training, to be a part of this wasn’t just hardcore, it was much more than that. It was a prestigious honor to participate in the event, to be a part of this brand, and most of all, to finish and achieve a whole different level of self-fulfillment and betterment.

Malaysia was the largest country to be represented with 247 athletes with Singapore a close second, with 202 athletes. Japan was the third largest with 180 athletes and international athletes made up 83% of the list. The youngest athlete was 20 years old and the oldest was 77 years old. Ironman Malaysia was off to a promising, diverse, adrenaline-filled start.

On Race Day we headed to the yacht club in darkness. The usually vibrant streets of Langkawi were ominously cordoned off, guarded by volunteers with walkie -talkies. We were hustled into two boats with other journalists in shiny vests and sailed towards the swim start point as the sun rose. The pro athlete’s were in the water first, shortly followed by another wave of potential Ironman-finishers. The rolling start ensured a smooth flow of athletes, their bare arms flying in 30C water.

As the athletes pushed to swim 3.9km, the media boats rushed to the shore to wait for the first swimmers to reach the transition point where they had to grab a bike and start their 180km journey speeding through sleepy island roads. The two-loop bike course took the athletes through several local villages (‘Kampungs’), giving them a glimpse of the colorful local sights.

The run course covered 42.2km of tropical flat road, passing local night markets and botanical gardens. Patrick Nillson was the first male to finish, making this his maiden Ironman win as well as the biggest win of his career. The Swedish pro had trouble with his bike chain that got stuck on the second lap, but managed to regain his position. At 08:41:53, he stumbled into the finish line tape and collapsed onto the ground. “That was a really tough day especially the last 10k. The 1st two laps I kept reminding myself to stay cool and knew I had the lead and the guys would have to run really good to catch me. But those two laps. Those were really REALLY hard”, Nillson said.

Fredrick Croneberg from Sweden came in second at 8:58:45. Malaysia’s first athlete to cross the line was Mohd Amran Ghani. Running his first Ironman ever, the firefighter ranked 20 overall, with a time of 10:14:54.

If there was any uncertainty over who would win the race overall, the women’s race was a shoe in for German pro athlete Diana Riesler who won her maiden IRONMAN race, coming in fifth overall.

This year in Langkawi, it seemed like those who could stand the heat, as well as beat it, reaped the rewards at the finish line. IRONMAN’s return to the tropical islands of Langkawi saw the already popular tourist destination swell with people, passion and drama like never before. The qualified athletes will head to Kona, Hawaii, next year, under the watchful eyes of this steadily growing triathlon cult following.