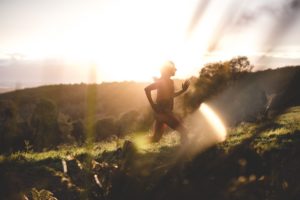 On 5th November, Samantha Gash stepped out of her campervan at 5:15am to find a group of children, ready to start the day’s run with her. She was in Shillong, Meghalaya in North-East India, at the final destination on the last day of her 12-week journey.

She wrote in a Facebook post, “As we stepped out of the campervan at 5:15am there was dozens of kids waiting to run with me. It was an unexpected sight but one I got pretty pumped to see. There was many lighthearted moments before we kicked off, notably when I read their posted “Samantha Cash”.”

She continued to write, “The closer we got to the stadium the more I found myself realising what was actually happening. For so long I have tried not to imagine the finish. My goal was to always focus on one day at a time and not fixate on a finishing point so far into the future. However, now it was here and I wasn’t quite sure what to do with that.”

The Australian endurance athlete and advocate for social change ran her final few metres at the Jawaharlal Nehru Football Stadium amidst a big crowd of people cheering her on.

Watch the final part of her run below.

The World Vision Australia ambassador’s Run India project began on 22nd August and was aimed at raising funds for underprivileged children’s education in India, and highlighting the various barriers to quality education in the country.

She ran from Jaisalmer, Rajasthan in west India, known to be one of the driest places in the country, all the way to Shillong, Meghalaya in east India, one of the wettest places on earth in 80 days. She crossed eight states and covered a total of 3,211km.

During her journey, she visited 18 World Vision India centres and spoke to women and children of different communities. In an interview with The Outdoor Journal Ambassador Jonty Rhodes, Ms. Gash said, “Access to quality education is a big problem in India. One of the motives of this project is looking at the various barriers to education. World Vision finds out the issues of the community and then figures out the best model that helps it.”

The Run India project has managed to raise nearly $145,000 through this endeavour.

Read more about Samantha Gash and her epic run here.