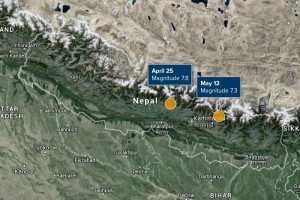 Sources say at least 26 people have died across the sub-continent as a 7.3 earthquake hit Nepal Tuesday afternoon

The quake was followed by seven aftershocks.

Nearly three weeks after a major earthquake claimed over 8000 lives, the Himalayan nation was struck with a 7.3-magnitude earthquake Tuesday afternoon at 12:47 pm IST. The quake’s epicenter was near Chautara in the Sindhupalchowk district of Nepal.

“We have received information that at least 22 people are confirmed dead so far with several injured across Sindhupalchowk, Dolakha and Lalitpur,” Ramesh Prasad Dhamala, president of Trekking Agencies’ Association of Nepal (TAAN) told The Outdoor Journal over telephone Tuesday afternoon.

“The Khumbu region has also witnessed damage, but we have not got any updates on the extent of damage nor of any casualty so far,” he added.

“There has been damage in Kathmandu and Bhaktapur, our rescue teams are moving to these places,” he continued.

Meanwhile, Sunil Kumar, a senior disaster management official of Bihar in east India (a state bordering Nepal) told The Outdoor Journal over telephone, “Four people have died in the state, and 20 are injured.”

“It is strange that the areas of Bihar bordering Nepal were not affected as much as the inner cities. Deaths happened owing to wall collapses,” he said.

The quake was followed by seven aftershocks, and tremors were reportedly felt in cities as far as New Delhi in India and Dhaka in Bangladesh.

The epicenter, according to the US Geological Survey website, falls within Sindhupalchowk district of eastern Nepal, between Kathmandu and Everest Base Camp, 18km south east of Kodari.

The initial 7.8-magnitude earthquake that claimed over 8000 lives triggered avalanches on Everest base camp, killing at least 19 people. All Everest expeditions were called off after the avalanche.