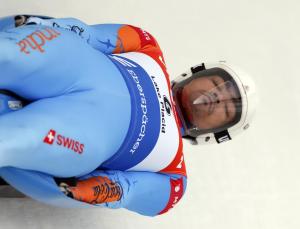 The only athlete of the sport from the country made a name in India's maiden entry in the Luge World Cup 2014 being held at Olympic Track in Lake Placid, New York.

Shiva’s coach, and Luge legend Duncan Kennedy, who has 21 world titles to his credit was satisfied with India’s performance.

“We hit all the key targets we had set for ourselves in this race. Shiva still has a long way to go as a slider and as he gets more and more comfortable with the new equipment, we can expect the results to improve further.  I think it is a great way to start the season with a personal best.,” Kennedy said.

USA’s Tucker West, bagged the gold medal setting a new track record of 51.002. West, who has also trained under Duncan until last winter is riding on equipment built by his former coach.

Shiva’s next race is the Asian Championships in Nagano, Japan on the December 21 where he has already won two gold medals and the silver medal last year.

“I am happy with where we are placed at the moment. There are no miracles in sport and you have to work hard to earn each hundredth of a second in Luge. That is what I plan to do and as long as I keep improving on my own records and ranking gradually, I will be satisfied,” the Indian athlete said.

The Luge World Cup 2014 circuit kicked off yesterday at Olympic Track with a promising show for India. Shiva Keshavan put down a personal best time of 53.125 seconds and finished the Nations Cup race with a best ever showing of 15th Place and stormed into the finals for the very first time.

The race took place in tough weather conditions with the temperatures dropping to -13 degrees Celcius making the ice extremely hard and three top athletes crashing out as they failed to find their grip on the ice.

Satisfied with his performance, the Indian Luge pilot said, “Me and my coach Duncan are thrilled with the result. We have been working on some key driving points and aiming for stability and consistency, which paid off under these tough conditions. The aim is to take it one step at a time and continue to improve while slowly unlocking more speed from our sled during the year without compromising on control or safety. I am excited about the World Cup final on Saturday as it is our first time competing at this level. Thanks to my team and all the support back home.”