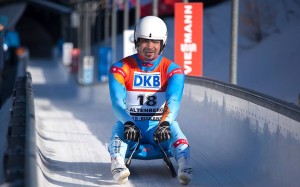 This marks the end of a ‘successful’ world cup season for Shiva, with national records in all competitions.

Felix Loch of Germany finished first, with a time of 1:48.193 seconds.

According to a press release sent to The Outdoor Journal, “This race marks the end of a successful world cup season for Shiva with national records.”  Earlier this winter he won a silver medal at the Asian Championship.

Shiva, and his American coach Duncan Kennedy are upbeat and satisfied with the results this year. “We had set out with a clear goal of making the finals at the World Cup and we did that,” Shiva said in a press release. “I have been riding a new prototype sled that Duncan has manufactured. I feel comfortable on it and was able to post consistent times. We have built a good base for next season and we plan to target the top 10 in the Nations Cup and in the top 20 in the World Cup for sure.”

Despite the results, the going has not been easy for the Indian team. A severe crash in Lillehammer, Norway in January wrecked both blades of the new sled with propriety Team India technology that is being developed under Coach Kennedy. The team also suffered during the subsequent World Championships in Latvia, as they were not able to efficiently setup the spare blades after the crash and had to be content with a participatory role in the race.

The team is already setting their sights on future races, and while Shiva does his athletic training, coach Kennedy will be working on the technical aspects. “With all the training and testing this winter, I will be able to build a new sled around Shiva based on the current prototype. We are also getting technological help from Clarkson University in New York for aerodynamics. A new pod is being designed which will allow us to shave off considerable time next season”, said Kennedy from Germany.

“The biggest challenge for us is funding”, says Shiva. ”The Sports Ministry has totally ignored our requests this year. They have not paid for any of the expenses for us to represent our country, not even my coach’s salary. We have only come so far due to the generosity of my corporate sponsors MTS and Coca-Cola (India). I will approach other potential sponsors to support us through funding or technical support in our mission for India,” he added.

The world cup was organised by the International Luge Federation, the main international federation for all luge sports. It is headquartered in Berchtesgaden, Germany.