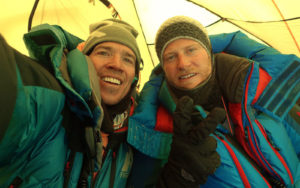 Mountaineers Cory Richards and Adrian Ballinger are back on Everest.

Armed with Snapchat and a whole lot of experience, the duo is attempting the peak (again) without oxygen.

UPDATE: Just before 11 am on May 27, Adrian Ballinger and Cory Richards summited Mt. Everest. The climbers left Camp 3 (located at roughly 27,000 feet) the night before, staggering their departure times; Ballinger left slightly ahead of Richards, since the latter had been climbing quicker during the preceding days. Several hours into his summit push, Richards began feeling poorly and contemplated turning around, but ultimately decided against it, choosing to use supplemental oxygen the rest of the way. A real-time update posted by his support team on his Twitter feed read: “After almost turning back, Cory switches to Os to support Adrian’s [summit push].” After having his efforts rebuffed last year, Ballinger got his redemption, summiting without supplemental oxygen. A few hours later, both climbers were back in Advanced Base Camp, effectively bringing to a close the #EverestNoFilter expedition. And what a great way to end it was!

In 2016, Cory Richards and Adrian Ballinger garnered a huge following on Snapchat as they provided an “unfiltered” view of climbing Everest. The first “Snapumentary” from the mountain, their project and page was christened “EverestNoFilter”. Soon, their account was getting hundreds of thousands of views per day. Providing viewers with a rare first-hand account of the struggles, challenges, risks, and daily experiences linked to the climb, this was a first when it came to expedition journalism. This was to be their first attempt of the peak without supplemental oxygen. Richards managed to make it to the top while Ballinger decided to turn back 250 meters from the summit.

Why are they attempting it again? While George Mallory would’ve said “because it’s there”, round two is about redemption for Adrian. This time it’s all about getting Ballinger on the top with no-O’s, a dream of his since he was 14 years old. The duo made such a compatible team last year that they’ve decided to go at it again, hoping for a summit bid sometime during end May.

Adrian Ballinger, the founder and CEO of Alpenglow Expeditions, is the only American guide to have AMGA/IFMGA certification. Guiding full time for 15 years on five continents with over 100 expeditions under his belt, Adrian has made over ten summits of 8,000-meter peaks, six of those on Everest.

Both Richards and Ballinger are members of the elite Eddie Bauer team of guides and athletes. One of the world’s leading outdoor adventure outfitters, the brand has provided the team with all their technical outerwear and gear. Incidentally, the company also sponsored the first American to summit Mt. Everest. Other sponsors include Strava, Hiball Energy Drink, and Samsung.

The Outdoor Journal got a chance to catch up with them for a quick interview:

This has been covered far and wide, but can you quickly take us back to the inception of the original expedition? How did the “no-O” (no oxygen) idea come about, how did you choose each other, and how did you decide to Snapchat the entire thing?

Cory: This expedition and last year’s expedition has been covered a lot. Going back to the beginning, Adrian and I met on the south side of Everest in 2010 and became fast friends. We always talked about doing a no-oxygen ascent of Everest whenever that opportunity arose. When we both got on the Eddie Bauer athlete guide team, it was a perfect time for us to start scheming and dreaming.

Adrian: Both of us had always dreamed of climbing Everest without oxygen. Having guided the mountain many times with oxygen, I always wanted to challenge myself in this way. And Cory right from the beginning when he first started. In regards to the Snapchatting piece of the puzzle, both Cory and I have always tried to tell the stories of our expedition the best way we really can. That used to be blogging, then it was Instagram, and then Snapchat was the next logical step for showing the truest way we could share the story—the most authentic view we could give people of Everest. And obviously last year it was very popular, and this year the following continues to grow which is great to see.

Cory: Snapchat is really, the word that we always use—an “uncurated” look of things. It shows the boredom, elation, fun, angst, sickness, and health. So it’s a very effective storytelling tool when you’re trying to peel back the veneer of social media and curated content.

We followed your 2016 expedition from start to finish. It was thrilling. As an audience, we felt like we were there every step of the way. Has your Snapchat storytelling changed for the 2017 attempt? If so, how?

Adrian: Last year we had no idea how Snapchatting the climb would be and where it would go. It ended up being so much fun. This year, we’re able to get into it with more knowledge. So the biggest thing we changed is the technology we’re using. We’re using a higher speed internet setup from a company called BGAN instead of Thoraya. We’re also bringing a lot more power with us, with the goal that we can get far more snaps out and actually to the audience. Last year, I bet we only got out 25% of what we recorded. This year we’re doing a lot better so far.

Cory: Another thing we’re doing is actually taking cues from viewers and trying to answer questions about the trip that they want to know. So essentially, it’s viewer directed storytelling on some level and I think that’s a new and different direction for all social content. The other thing that we try to do with it is to get as personal as we possibly can- the more personal you get, the more responses you get because people can really relate to that. Last year was tough for both of you. Cory, you made it to the summit without your partner, and Adrian, you didn’t summit due to health reasons. What have you guys changed in your training and diet to make sure you’re standing at the top, hand in hand?

Cory: I’m not sure we’re going to stand on the top “hand-in-hand”, *laughs*, but we have changed some things. Primarily, Adrian’s done a lot of work so I’m going to hand it over to him here.

Adrian: Last year I turned around after a two-month expedition and after four years of planning. I turned around after an hour or so from the top because my body got too cold where I felt I couldn’t safely continue up working the ropes, get back down, and be confident that I could get back down. It was a really difficult decision. This year, the biggest things that I’ve changed are diet and training. So I’m really focussing my body to shift my metabolism from burning sugars or carbohydrates to burning fats. And the reason for that is that fats are sort of your low endurance, long burning engine of your body. And so, I want my engine to be able to run on that summit day really low and really long. Cory was really successful with that exact type of training in his past, so that’s really been my focus. Briefly (if that’s possible), tell us about the trials and tribulations of planning an expedition of this magnitude.

Cory: Himalayan expeditions are really a team sport. It doesn’t matter how much we just see one singular person on a summit. There are literally hundreds of people that make this happen. So if you can imagine, for the last year basically, since we came home, we started planning this expedition. That requires logistics in Nepal, logistics in Tibet, shopping in Europe, shopping in California, shopping in Montana. It’s a dizzying process that if you were to look at it, sort of en masse, it wouldn’t make any sense. You have to break it down into individual pieces, do it day by day. And that’s the only way this stuff gets done. Adrian’s been doing this, for about 20 years or so. Planning an expedition to him seems almost like second nature.

Adrian: I’m just a total logistics dork. I love all the little puzzle pieces and all the excel spreadsheets that go together to make an expedition like this work. I own an expedition guiding company called Alpenglow Expeditions, and Cory and I sort of get to piggyback on those logistics. But to get a sense of logistics, I think we shipped a little over 9000 pounds of gear and food to Tibet for this expedition. So, it’s pretty fun. How would you explain Snapchatting your Everest climb to George Mallory?

Cory: In every way, Adrian and I have always said this, every major expedition has always used the storytelling means of their day, whether that was writing, photography or filmmaking. It’s just that storytelling has new tools and it’s evolved. Snapchatting on so many levels isn’t really different than taking short video clips, (that’s really what it is), or taking pictures, and describing them in slideshows or writing about your experience in a book. It’s just the newest way to do that and it’s the more immediate way to do that. So the explanation is really simple—we’re telling a story just the way all expeditions always have.

What is your advice to climbers who want to summit Everest?

Adrian: My advice for climbers who want to summit Everest is that it’s an incredible goal worth dedicating years of your life to but really, that is the key. Do not short cut the process to go to Everest. My company shortens the length of time that trips have to be on Everest so now it only takes 35 days to climb the mountain instead of 75 days. But climbers have still spent years building experience to be able to make good confident decisions on the mountain when things go wrong and there is absolutely no substitute for that. So build experience, take time, work with qualified guide companies and mountain guides to make sure you’re ready before you go and have the best experience possible.

Cory: And carry respect into every aspect of that.