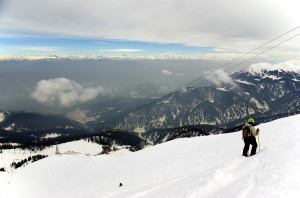 Fresh snow in Gulmarg and Pahalgam's countryside calls people for a blend of adventure sports and culture at the 'Snow Carnival'.

Over a few snow days in March, the ski resort of Gulmarg and hilly region of Pahalgam in north India’s Kashmir state are expected to host hundreds of people skiing, snow cycling and playing rugby as part of the ‘Snow Carnival’.

Organised by the Jammu & Kashmir Tourism in collaboration with the Cable Car Corporation and the Winter Games Association, the event is scheduled to be held in Pahalgam on March 14 and in Gulmarg from March  15 – 17.

With multitude of activities, the tourism department expects 500 people in Gulmarg & Pahalgam just for the Snow Carnival. In Pahalgam, the scheduled activities apart from skiing are ‘snow cycling’, ‘snow rugby’, archery, snow tours and cultural programs. In the epic ski resort of Gulmarg, there’s the Gondola Ski Cup, a potentially exciting night skiing event, ATV races, and ‘snow cycling’. Of course, many tourists can be expected to spend money on going up the northern hemisphere’s highest cable car and if the weather’s clear, catch a glimpse of Nanga Parbat (8126m) in neighboring Pakistan.

The Gondola Ski Cup is for advanced skiers with skills and it will take place up on Kangdori, at Phase 1 of the Gondola.

“Winter sports festivals have been organized in the valley for the past few years with different names but with the same motive”, Assistant Director Tourism Gulmarg Syed Faheem told The Outdoor Journal. He added that such events would increase footfall in J&K state in winter and promote tourism in a better way.