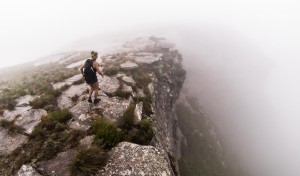 South African Skymarathon season off to a flying start

Don Wauchope and Mahlawe take top honours at the first two SkyMarathons of 2015 in South Africa.

The first two events in the 2015 South African Skyrunner Series have ticked the boxes of both challenging and gratifying, putting runners and organisers to the test as only great races can.

The inaugural Drakensberg Northern Trail (DNT) took place at the end of March, and saw the Don Wauchope husband and wife duo take honours yet again, with Iain winning the 42km Skymarathon® overall in 4:46, and Su as first woman in 6:16.

Starting and finishing at the Oliviershoek Pass in the northern Drakensberg, the race took place in testing conditions, with thick mist delaying the 6am race start by 10 minutes. As a result of poor marking at a junction in the trail several runners headed off course in the first few kilometers of the route, but fortunately the lead runners completed the full race distance, and the results showed a full quota of podium placings for all categories of the race.

Reputedly not a route for the faint-hearted, the DNT trail follows the borderline between the Free State and KwaZulu Natal, and has some technical sections. The course tops out at 2 350m above sea level, offering spectacular views of the Free State’s sandstone cliffs and KZN’s sweeping grasslands and forests. The descent off the ridge down into KZN is appropriately named Stoney Pass and is renowned for its technical difficulty.

Race director Andrew Booth had a pragmatic approach to the challenges he faced on race day, saying what the DNT 2015 taught him is that when things go wrong, it’s how we deal with the situation that counts.

“We have to resist the temptation to bail out of the situation, and rather keep trying to do what’s best for the race and give the runners the great experience they signed up for. We all left the DNT2015 richer people for the day, and we all can’t wait to go back for another shot at it!” said Booth.

The second event in the 2015 South African Skyrunner® Series, the 42km Ingeli Skymarathon® took place at the end of April, and boasted an exciting race with a dramatic finish. Nceba Mahlawe snatched the lead from Jock Green in the final kilometers, scooping his first skyrunning win in 4:12.

Hosted by the Ingeli Forest Resort near Kokstad in KZN, the challenging route is a combination of mountainous rocky trail, jeep track and beautiful single track through indigenous forest.

“The race was a huge success, and certainly tested the tenacity and will of the runners. Every one of them left with great memories of the amazing Ingeli mountain range, one of the most spectacular parts of the province,” said race director Katherine Thorneycroft.

The next race in the 2015 South African Skyrunner Series is the Uitsoek Skymarathon in Nelspruit, Mpumalanga on 13 June. The distance of the race is 36km, with a vertical gain of 2,167m.

Feature Image: A female runner savors the chance to run in the clouds at one of the highest points of the Drakensberg Northern Trail Skymarathon®. Photo by Terence Vrugtman.