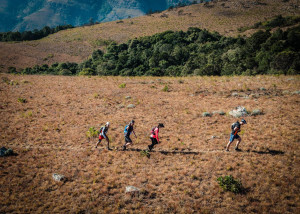 South Africa's Bennie Roux and Nicky Booyen stole the show on day one of this year's 34km Skymarathon.

Hosted by Stanford Lake College, the 34km Skymarathon formed day one of the Clemengold Wolkberg Trail Run two-day stage race – participants could either enter the Skymarathon or the full stage race.

The race started at the Thaba Metsi resort before plunging down to the pine plantations of the Letaba River valley. Just before the 5km mark began the brutal 7km climb up to the Iron Crown, summit of the highest peak in the Limpopo Province at 2 126m, marking the point for King and Queen of the Mountain.

The men’s race was very tight for most of the route, with Bennie Roux, Naas Janse van Rensburg and Tiaan Fullard pushing each other up the steep climb. Local runner Tiaan Fullard pipped the lead pack to win King of the Mountain, but paid the price later in the race with the chasing pack catching him in the final three kilometres.

Winner Bennie Roux ran a very patient race to the summit of the Iron Crown, and then turned up the pace for the last two-thirds of the race to blast his way to the top podium spot (3:07:09), some four minutes off his record pace at last year’s race. Naas Janse van Rensburg, last year’s runner up, once again ran strongly into second place (3:15:00) with Vernon Visser surging over the final 10 km to take the final podium place (3:16:18).

The women’s race was dominated by Nicky Booyens, who used her strong climbing and technical trail skills to first win Queen of the Mountain and then to take the race itself in3:36:02, more than 30 minutes ahead of second placed Marie-Zanne de Kock (3:57:01). Marcelle Coetzee rounded off the top three in the ladies (4:02:23).

The clear skies on race day made for spectacular views, particularly for the media helicopter, but fairly hot conditions for the runners, with times proving a little slower than on last year’s cooler, misty race.

“Having the Clemengold Wolkberg Trail Run as part of this year’s Skyrunner Series has been an extremely exciting addition to the event. The attraction of a well-priced two-day stage race, including the SkyMarathon as day one, hosted by Stanford Lake College, together with the acclaim of being a part of the 2015 Skyrunner Series drew huge interest from trail runners across South Africa, from as far away as Cape Town. The significant interest meant we reached our entries limit a full five weeks before race day,” says race director Craig Carolan.

Carolan added that Stanford Lake College, as organisers of the event, have already been in touch with land owners regarding next year’s race, looking to increase the field for the Wolkberg SkyMarathon, an exciting prospect for host, sponsors, trail runners and the South African Skyrunning Association (SASA).

The next event in the 2015 Skyrunner® Series is the Marloth Mountain Challenge Ultra SkyMarathon® (55km with 3 400m vertical gain) on 26 September. Entries are for the MMC are available at https://sites.google.com/site/mountainchallengeza/mmc/entry-details